Russia vetoed a UN Security Council resolution on Friday that would have demanded that Moscow immediately stop its attack on Ukraine and withdraw all troops, a move several Council members said was deplorable, but inevitable.

While 11 of the Council’s 15 members voted in favour of the text, China India, and the United Arab Emirates abstained.

The Security Council’s latest attempt to end the Ukraine crisis caps a week of activity at the United Nations seeking a diplomatic offramp to Russian military action in the country, including near daily press stakeouts by the Secretary-General, three emergency Council sessions, and one meeting of the 193-member General Assembly, which saw speaker after speaker call for de-escalation.

"The United Nations was born out of war to end war. Today, that objective was not achieved. But we must never give up.We must give peace another chance." -- @antonioguterres following Security Council meeting on Ukraine. https://t.co/TOCcBZIhl8 pic.twitter.com/1TOfisb6FK

Speaking to journalists after this evening's Council meeting, Secretary-General António Guterres, stressed that while the United Nations had today not achieved its primary objective to end war, “we must never give up.”

“We must give peace another chance. Soldiers need to return to their barracks. Leaders need to turn to the path of dialogue and peace,” he said.

And despite growing operational challenges, he assured that the UN is scaling up the delivery of life-saving support on both sides of the line of contact.

Against the backdrop of multiplying humanitarian needs, dying civilians and at least 100,000 Ukrainians reportedly fleeing their homes – with many crossing into neighbouring countries, underlining the regional nature of this growing crisis – Mr. Guterres announced the appointment of Amin Awad as UN Crisis Coordinator for Ukraine.

A close colleague of Mr. Guterres when he was chief of the UN refugee agency, UNHCR, Mr. Awad will lead the coordination of all UN efforts, including its humanitarian response, on both sides of the contact line.

“All concerned in this conflict must respect international humanitarian law and guarantee the safety and freedom of movement of UN staff and other humanitarians. Especially in a moment like this, it is important to remember that the UN…is tens of thousands of women and men around the world,” he said.

The top UN official outlined the work of the Organization, from feeding the hungry, vaccinating children and promoting development to protecting civilians in peacekeeping operations, mediating conflicts and supporting refugees and migrants, all while “standing, delivering, extending a lifeline of hope.’”

He stressed that although the UN Charter has been challenged in the past, it has “stood firm on the side of peace, security, development, justice, international law and human rights”.

“Time after time, when the international community has rallied together in solidarity, those values have prevailed. They will prevail, independently of what happened today,” the UN chief said.

“We must do everything in our power so that they prevail in Ukraine but they prevail for all humanity,” concluded the Secretary-General.

UN Web TV
UN chief on Ukraine: "We must give peace another chance" - Media Stakeout (25 February 2022)

Introducing the draft resolution, which her country had helped craft, US Ambassador Linda Thomas-Greenfield painted a picture of Russia’s invasion of Ukraine that was “so bold, so brazen,” that it threatens the international system “as we know it.”

"We have a solemn responsibility not to look away," she said stressing that Russia must be held accountable, and its forces immediately, completely and unconditionally withdrawn.

“Today we are taking a principled stand in this Council,” Ms. Thomas-Greenfield said. “There is no middle ground,” responsible States do not invade their neighbours.

After the text was defeated, Ms. Thomas-Greenfield took the floor again.

The US Ambassador said that despite the actions of a "reckless, irresponsible" Member State, the United States will continue to stand with Ukraine against Russia’s aggression.

UN Photo/Mark Garten
Linda Thomas-Greenfield, Permanent Representative of the United States to the United Nations, addresses the Security Council meeting on the situation in Ukraine.

UK Ambassador Dame Barbara Woodward described how women and children in Kyiv, pensioners in Odessa and people all over Ukraine are “sheltering from Russia’s onslaught.”

She stated that the draft resolution sent  "a message to the world that the rules we built together must be defended, because otherwise, who will be next.”

Moreover, President Vladimir Putin’s “massive invasion" of Ukraine to remove the Government is "a naked aggression” that must be condemned, Ms. Woodward added.

After the vote, the UK Ambassador pointed out that Russia was the only Council Member to vote against the draft.

“Make no mistake, Russia is isolated, it has no support for the invasion of Ukraine,” she said, noting that history would record what had happened today, and that the United Kingdom “stands firmly in support” of the Ukrainian people and would hold Russia accountable for its actions.

A veto against international law

After voting in favour of the resolution, France’s Ambassador, Nicolas de Rivière, said that Russia’s “premediated aggression” is killing civilians and destroying infrastructure with goal of rebuilding the Russian empire.

While other members expressed their commitment to international law, Russia vetoed it.

“Russia is alone,” he observed, adding that “within the UN and in all bodies, France will continue to mobilize with its partners to support Ukraine and the Ukrainian people.”

Indian Ambassador T. S. Tirumurti, who abstained, said that “dialogue is the only path forward,” no matter how daunting it might seem, and urged the Council to restore the difficult path forward.

Also abstaining, UAE Ambassador Lana Nusseibeh said that now that the resolution has been vetoed, the United Arab Emirates would continue to seek “inclusive and consultative processes” for a path forward.

Meanwhile, as the only Permanent Council member to abstain, Chinese Ambassador Zhang Jun warned against actions that might “shut the door” to a negotiated settlement. He reminded that the Ukraine crisis did not occur “overnight” and that the security of one State cannot come at the expense of that of others.

“Ukraine should become a bridge between East and West, not an outpost,” he said, adding that that cold war mentalities must be abandoned to build balanced European mechanisms and all parties should return to diplomacy.

Russian Ambassador Vasily Nebenzya said that he would not respond to those who had accused him of abusing his country's veto power. 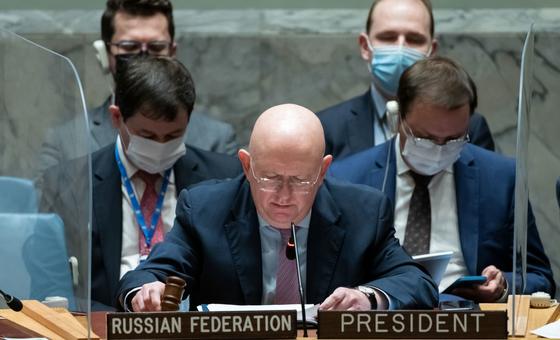 He accused the draft’s sponsors of “spinning tales” about the true situation in Ukraine, including Western allies’ attempts to cover up the fact that they had been flooding the Donbas with weapons.

“You have made Ukraine a pawn in your own game… this resolution is nothing other than yet another brutal, inhumane move on this Ukrainian chessboard,” he said.

Indeed, the situation is being exploited by political and media outlets, he said, citing examples of the “height of propaganda”, including the misuse of images from Donbas to portray what was being referred to as Russian aggression."

Speaking to the representatives of France, the UK and US, he said that there was no verifiable confirmation about the death of Ukrainian civilians; that photographs of supposed Russian artillery “is fake”; and that reports of attacks on civilian infrastructure were untrue.

Moreover, with its history of aggressions against other countries, the United States was “in no position to moralize.”

Ukraine Ambassador Sergiy Kyslytsya asserted that he would not dignify the “diabolical script” read by the Russian Ambassador, which was in fact “a rather detailed application for... a seat in Hell.”

He recalled that during the Security Council's discussions on the situation in Ukraine earlier in the week, Russia had begun bombing his country and sending forces across the border, including through Belarus.

Therefore, he was not surprised that Russia voted against the text, he said, denouncing the actions of “the Kremlin regime.”

Mr. Kyslytsya asked the Council to remember how many times the Russian Ambassador said that his country would not invade or bomb Ukraine. But after what had happened in recent days, “how can we trust you? You have no idea what is in the mind of your President,” he declared.

The Ukraine Ambassador also noted that according to the rules of procedure, the Russian Ambassador should not have been presiding over a meeting of which his country was the subject.

The Ukraine Ambassador asked the Council to dedicate a moment of silence “for peace… and to pray for the souls of those that have already been or may be killed”, inviting the Russian Ambassador to “pray for salvation.”

This was followed by solemn applause throughout the Chamber.

Noting that nothing could justify the bombing of hospitals and kindergartens –considered war crimes under the Rome Statute – he said that Ukraine was collecting evidence to send forward to the International Criminal Court (ICC).

Finally, Mr. Kyslytsya called on nations to break off diplomatic relations with the Russian Federation, and international organizations to sever ties with that country.

“You should stop wiping your feet” on the words of the Secretary-General and the work of the UN, and “show respect for the principles enshrined in the Charter,” he said.

In closing, the Ambassador maintained that while Ukraine remained open to negotiations, it was Russia that had launched an offensive that had sent “thousands of troops” into its territory. 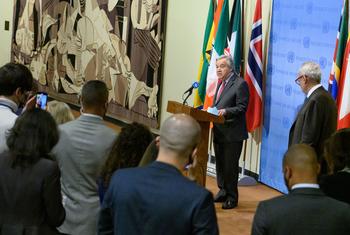 Russian military operations inside the sovereign territory of Ukraine “on a scale that Europe has not seen in decades, conflict directly with the United Nations Charter,” Secretary-General António Guterres told journalists on Thursday.