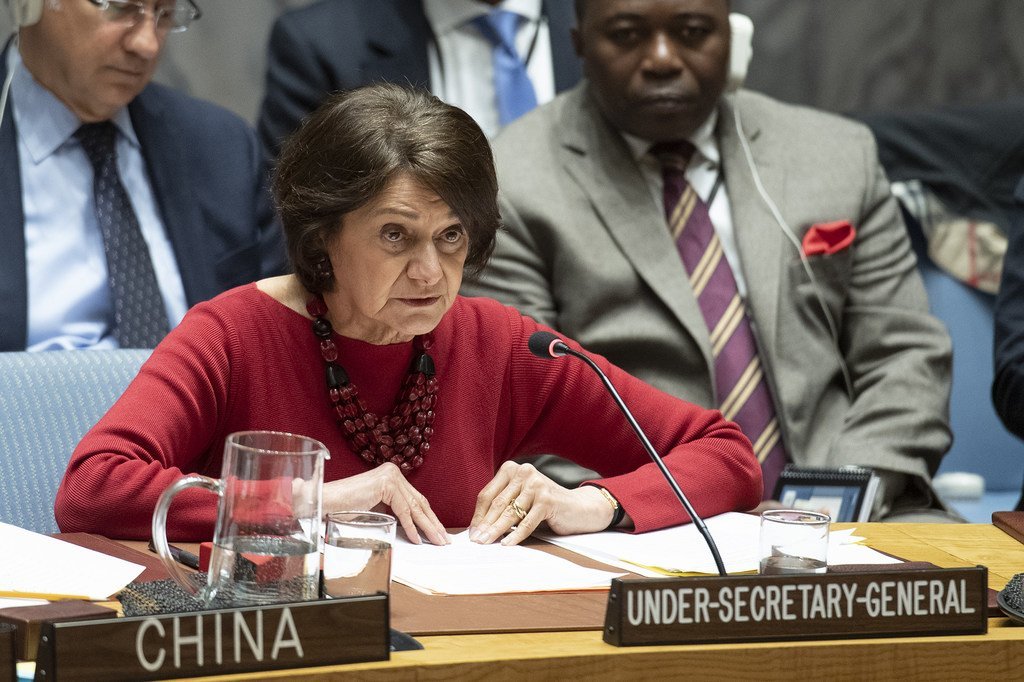 Briefing the Security Council on Monday, in the wake of Sunday’s confrontation between vessels from the two neighbouring countries off the coast of Crimea, Rosemary DiCarlo, the UN Under-Secretary-General for Political Affairs urged them “to refrain from any ratcheting up of actions or rhetoric.”

“[We] remind both [Russia and Ukraine] of the need to contain this incident so as to prevent a serious escalation that may have unforeseen consequences,” she said.

The incident involving the two nations’ ships took place off the coast of Crimea, which was annexed by Russia in 2014.

Ms. DiCarlo also recalled her previous calls on all parties to avoid any unilateral steps that could deepen the divide or depart from of the spirit and letter of the Minsk Agreements, which set out the necessary steps to restore peace in eastern regions of Ukraine.

Ms. DiCarlo said the UN fully supports regional efforts to find a peaceful settlement, and that the “renewed and constructive action” was needed by all concerned to overcome the apparent impasse in diplomatic negotiations, she added.

UN Secretary-General António Guterres also underlined the need to avoid further escalation of the situation in the Black Sea region.

.@antonioguterres expresses his great concern at the incident involving Ukrainian and Russian vessels in the Black Sea. He urges both parties to exercise maximum restraint and to take steps without delay to contain this incident and reduce tensions. https://t.co/gbPCSIJqjN

In a statement issued by his office, the UN chief called on the two countries to “exercise maximum restraint” and to take steps without delay to contain the incident and reduce tensions through all available peaceful means in accordance with the UN Charter.

“He underscores the need to fully respect the rights and obligations of all concerned parties under relevant international instruments,” noted the statement, adding that the sovereignty and territorial integrity of Ukraine, within its internationally recognized borders, in accordance with relevant General Assembly and Security Council resolutions, must also be fully respected.

In late February 2014, the situation in Ukraine went from political crisis, to violent confrontation and, later became a full-scale conflict between Government forces and separatists, in the country’s east.

The Security Council meeting followed a procedural vote rejecting the agenda of the day’s first meeting on the issue, requested by Russia, which argued that its borders at sea had been violated by Ukraine.

Dmitry A. Polyanskiy, the First Deputy Permanent Representative of Russia to the UN, argued that Ukrainian naval vessels had “illegally” crossed into Russian territory and did not acknowledge efforts made by Russian ships to warn them off.

Such actions were in violation of the UN Charter and norms of international law, he said.

“We consider such steps a violation of Russia’s sovereignty,” added Mr. Polyanskiy, praising what he described as the restraint and professionalism shown by Russian customs agents who acted to prevent any loss of life during the incident.

He said responsibility was “borne by those people” who gave the Ukrainian crew “the illegal command.” Mr. Polyanskiy told Council Members that the Ukrainian ships were being held in Russian ports, pending an investigation.

In a second meeting the same day, Volodymyr Yelchenko, the Permanent Representative of Ukraine to the UN, informed the Security Council of his country’s account of events, stating that what the Russian representative spoke earlier, were an “outright lie.”

“All hell broke loose” on 25 November, said, when one of the Ukrainian vessels, waiting to cross the Kerch Strait, linking Black Sea and the Sea of Azov, was rammed by a Russian coast guard ship, damaging it.

“The video of this attack is available online, if you watch it, you will clearly see the Ukrainian boat was trying to avoid the collision while the Russian ship was deliberately carrying out the attack,” he added.

After the incident, Russian vessels blocked other Ukrainian ships from providing any assistance he said, adding that the Ukrainian vessels – unable to pass through the strait and attempting to move to open seas – were followed by multiple Russian ships, forced to stop and seized by Russian forces.

♦ Receive daily updates directly in your inbox - Subscribe here to a topic.
♦ Download the UN News app for your iOS or Android devices.
Russia|Ukraine|security council