© UNICEF/Saleh Hayyan
A one-and-a-half year-old girl is treated for malnutrition at a hospital in Yemen.

“It should be obvious to everyone just how high the stakes have become”, said Hans Grundberg, Special Envoy of the Secretary-General for Yemen, recalling attacks in January by Ansar Allah – also known as the Houthis - on the UAE.

The UN Special Envoy for Yemen Hans Grundberg briefed the #SecurityCouncil on the latest developments in #Yemen, including efforts towards de-escalation &amp; his plan to make progress towards an inclusive political settlement. Full statement here: https://t.co/GlSRrzMp5y

For Yemenis, the past month was marked by a multiplication of frontlines and an “appalling” record number of civilian casualties, Mr. Grundberg said.  A coalition airstrike on a detention facility in Sadaa, which killed or injured more than 300 detainees, was among the worst incidents in three years.

He described the sharp increase in airstrikes, including on residential areas and civilian infrastructure in Sana’a and the crucial port city of Hudaydah, stressing that the war is also being fought in the economic arena, as the two sides and their allies battle over resources, trade flows through the Red Sea port, and monetary policy.

“The impact of this aspect of the war continues to irrefutably hit Yemen’s population as a whole”, he said.  The past month has seen particularly severe shortages in fuel and oil derivatives, notably in areas controlled by Ansar Allah.

After a long delay, four fuel ships were granted clearance to enter Hudaydah this month, yet only one was for the general market - not enough to meet the needs of the population.  He called again on parties to remove all obstacles.

The war is also being fought in the public domain with increasingly hostile media rhetoric combined with intimidation, detention and harassment of media professionals and activists.

He urged all sides to protect press freedom and release “immediately and unconditionally” detained journalists and political activists.

“Allowing the war to continue is a choice - and so is ending it.”

Convinced of this potential, Mr. Grundberg said he is developing a framework to advance an inclusive political settlement.  Through a multi-track process, the interests of the warring sides can be addressed within the broader Yemeni agenda along political, security and economic tracks.

The Special Envoy said he will begin a series of bilateral consultations next week aimed at informing and refining the framework, engaging with warring parties, political parties, civil society representatives and Yemeni experts in the political, security and economic arenas.

© WFP/Jonathan Dumont
The ruins of the old town of Sa'ada, in Yemen.

In parallel, he said he will continue to explore “every possibility” of fast-tracking de-escalation.

The war in Yemen, and the wider crisis it has unleashed, continues to threaten millions of lives … that crisis shows no signs of abating. The war is finding people in their homes, schools, mosques, hospitals and other places where civilians should be protected. 1/5 https://t.co/erYRk5Kabp pic.twitter.com/lz3fjY2fOS

In recent meetings in Riyadh and Muscat, he has urged the conflict parties to engage in de-escalation talks and presented options for moving forward.  “My calls, and the calls of this Council for restraint and de-escalation, remain unanswered,” he said.

Martin Griffiths, UN humanitarian affairs chief, and Emergency Relief Coordinator, said the war in Yemen – and the wider crisis it has unleashed – shows no sign of abating.

He described a “sharp and dangerous” escalation over the past six weeks, with more than 650 civilian casualties reported in January – an average of 21 civilians killed or injured each day by air strikes, shelling, small arms fire and other violence.

“It is by far the highest toll in the last three years”, he said, stressing that the war is finding people in their homes, schools, mosques, hospitals and other places where civilians should be protected.

A lifetime of war

Noting that the recent escalation is just the latest turn in a conflict that has now dragged on for seven years, he said Yemen has become a protracted crisis, with an entire generation of children growing up having known nothing but war.

Throughout, he said humanitarian partners have done “everything we can” to reduce the suffering.

In 2021, nearly 200 organizations worked together through the United Nations response plan to assist more than 11 million people every month, reaching every one of Yemen’s 333 districts.

He said access impediments remain a major problem, with aid workers facing far too many restrictions, and security challenges persist.

The biggest challenge by far is funding.  He warned that aid agencies are quickly running out of money, forcing them to slash life-saving programmes.  By the end of January, nearly two-thirds of major UN aid programmes had already scaled back or closed altogether.

In December, he said the World Food Programme (WFP) reduced food rations for eight million people.  Starting in March, they will likely receive no food at all, while many UN humanitarian flights in Yemen (UNHAS) will need to be cancelled.

If the funding gaps are not promptly addressed “it will be a death sentence for people whose coping mechanisms have been completely exhausted,” he warned.

“We cannot let the aid operation in Yemen fall apart,” he emphasized.  He called for a more sustainable approach to humanitarian funding, and prompt attention to the underlying drivers of need, especially the collapsing economy. 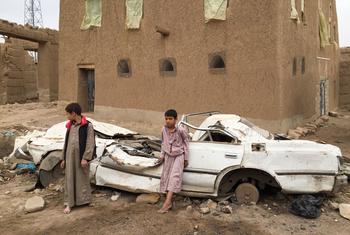 Airstrikes last week by the Saudi-led coalition in Yemen that hit a detention facility in the northern city of Sa’ada, killed some 91 people and injured dozens more, the UN human rights office, OHCHR, said on Friday, citing preliminary figures. 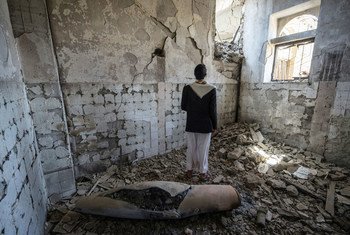 Violence in Yemen continues to escalate, raising casualties and spilling across the war-torn country’s borders, the Special Envoy for the country and the Humanitarian Coordinator warned on Tuesday.