© UNICEF/NOAA
A satellite image shows the formation of a low-pressure system named Batsirai over the Indian Ocean on 2 February 2022.

Batsirai made landfall on Saturday night local time, with wind speeds of up to 165 kilometres per hour, and wind gusts of up to 230km/h. The most affected districts of Nosy Varika, Mananjary and Manakara, according to early reports.

With more than 43,000 newly displaced across around 180 sites, and at least 211 schools impacted, UN teams are working with national authorities, to provide emergency relief and support, said the initial situation report published on Monday by the UN humanitarian affairs office, OCHA.

Numbers impacted are expected to rise in the days ahead, as more information becomes available, including for hard-to-reach areas yet to file initial reports on damage and loss of life sustained.

The Government estiates that up to 600,000 could be affected by Batsirai overall, and the number of displaced could rise to 150,000.

The World Food Programme (WFP) says that around 1.64 million are at crisis level or worse, when it comes to food insecurity.

Tropical Cyclone Batsirai’s wind and rains have caused considerable damage to roads and transport links, leaving some of the hardest-hit areas inaccessible. At least 19 roads and 17 bridges have been cut.

“The devastation wrought by Batsirai has compounded the suffering caused by the passage of Tropical Storm Ana and an Intertropical Convergence Zone in Madagascar less than two weeks ago”, OCHA noted.

Tropical Storm Ana left 55 people dead and affected 132,000, including 15,152 people who remain displaced, with 14,938 of them sheltering temporarily in 68 centres across the Analamanga region.The Government declare a State of Emergency on 27 January.

The cyclone has now entered the Mozambique channel, where it is moving southwards and away from land. It has lost much of its strength and was classified as Post-Tropical Depression ex-Batsirai at 4pm local time on Monday, said OCHA.

The Government activated search and rescue efforts on Sunday, including a helicopter rescue operation in some areas.

UN assessments began on Monday, with the UN Humanitarian Air Service (UNHAS) conduction a first aerial assessment. This will be complemented by multisectoral needs assessments by teams on the ground in the coming days, which will provide a more comprehensive overview of the situation and help inform response priorities in the days ahead.

The Government is providing cash transfers for vulnerable households impacted by the cyclone, while humanitarian partners have deployed surge teams and are ramping-up their responses, said OCHA.

The World Food Programme (WFP) has started distributing hot meals to 4,000 evacuated and displaced people in shelters, in coordination with national authorities.

Pasqualina DiSirio, Country Director of WFP Madagascar, said that around 150,000 had been affected so far, "but these numbers can easily rise."

"We have right now, still waters increasing in the canals, in the rivers, and people are still in danger. We know for sure that rice fields, that rice crops will be damaged. This is the main crop for Malagasy people and they will be seriously affected in food security in the next three to six months if we don’t do something immediately and we don’t help them recover.”

Protection partners, including UNICEF and its government counterpart, are providing kits to establish child-friendly spaces in Analamanga, Anosy and Analanjirofo regions, as well as training social workers on gender-based violence (GBV) and the prevention of sexual exploitation and abuse (PSEA) in other impacted areas.

The UN gender and sexual health agency UNFPA and its partners - including the Ministry of Health - are providing psychological first aid in Manakara, Fianarantsoa, Vangaindrano, Mahabako and Taolagnaro (Fort-Dauphin), distributing dignity kits for women and girl survivors of GBV in the Vatovavy, Fitovinany, Atsimo Andrefana, Anosy, Androy regions, and providing medical care for survivors of sexual violence 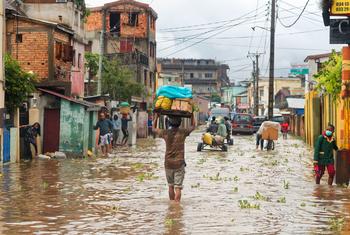 Madagascar: Recovering from one deadly cyclone, bracing for another

Lives, livelihoods, and vital crops are at risk across Madagascar with Tropical Cyclone Batsirai expected to make landfall within hours. Meanwhile, the island nation off the coast of East Africa is still reeling from the impact of Storm Ana last month, the World Food Programme (WFP) warned on Friday. 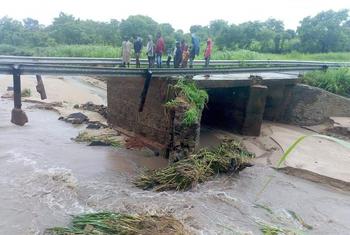 UN teams are on the ground in Mozambique assisting thousands of people affected by Tropical Storm Ana, which made landfall in central and northern regions of the country earlier this week.