© WFP/Sandaeric Nirinarison
The damage of the Tropical Cyclone Batsirai in the east coast of Madagascar.
22 February 2022
Climate and Environment

The island nation of Madagascar is shoring up for its fourth tropical cyclone in a month, UN aid agencies warned on Tuesday, as they outlined plans to help the authorities assist the most vulnerable.

While tropical cyclone Emnati was due to make landfall in the south of the East African State on Tuesday – on Madagascar’s east coast – central and southern areas were also likely to be affected.

Tropical Cyclone #Emnati forecast to make landfall in #Madagascar today at Category 2 strength around 18 GMT.
It is 4th tropical cyclone in a month to hit Madagascar and follows nearly the same track as #Batsirai, which caused devastation and loss of life on 5 February. pic.twitter.com/qjSvGCkhbT

“We are in a race against time to protect those who dealt with the fury of the first three extreme weather events from the impact of Emnati,” said Jens Laerke, spokesperson for UN humanitarian coordination office, OCHA.

“Response teams have been deployed earlier to support the Government-led response.”

To help boost the response, UN humanitarians have appealed for $26 million in funding since cyclone Batsirai made landfall earlier this month.

The World Food Programme (WFP) acknowledged that the new storm would increase the needs of those already reeling from four weeks of weather chaos and said that it was ready to support those affected.

More than 1.6 million people need humanitarian assistance, including 334,000 in the Grand Sud who are facing emergency levels of food insecurity – following recurring drought and the socio-economic impact of the COVID-19 pandemic.

In addition to boosting staff numbers on the ground, the UN agency is coordinating with the Government to distribute hot meals in affected areas and 148 tonnes of stored food while awaiting additional supplies, when it is safe to make deliveries.

Although it is the typhoon season in the Indian Ocean, it is rare to see four storms hitting the same country in the space of four weeks, said Clare Nullis from the World Meteorological Organization (WMO).

“We had been concerned yesterday that it might strengthen to a strong category three or even four, but fortunately, that didn’t happen; but even so the winds are going to be very high, there have been high winds, destructive gusts of between 150 to 200 kilometres per hour, and it’s a big storm, so these winds are going to cover a large radius.” 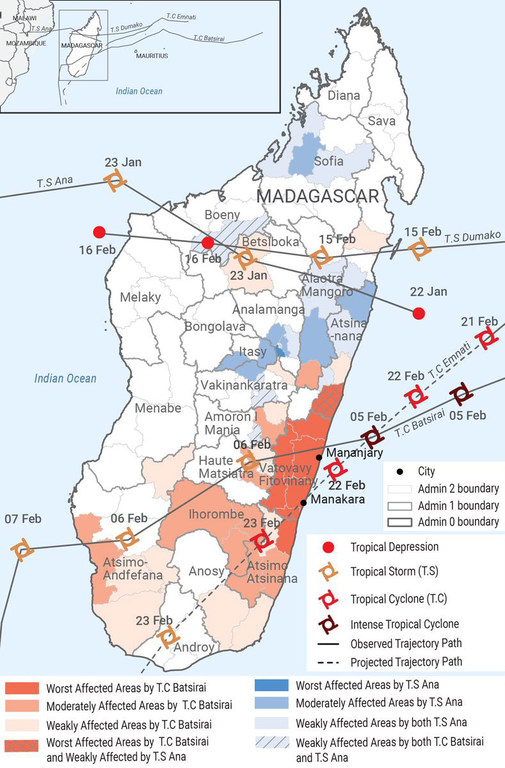 OCHA
Tropical Cyclone Emnati is forecast to reach Madagascar on Tuesday, 22 February, in the late evening.

Heavy rains are also expected along the path of the storm – up to 250 millimetres in the space of 24 hours on the flat and from 400 to 500mm at higher altitudes.

Noting that the rains will cause “bad flooding and landslides”, Ms. Nullis explained, “the land is waterlogged, and it can’t absorb any more water.”

There may also be significant flooding in coastal areas, said the WMO official, citing the combination of a “cyclonic swell” associated with waves close to 10 metres high offshore and a sea level rise of about one metre.

More than 21,000 people are still displaced and a further 5,000 people were affected by tropical storm Dumako, which struck on 15 February, according to the UN humanitarian coordination body, OCHA.

Around 21,000 people are still displaced and 20,500 homes have been destroyed, flooded or damaged by Batsirai.

“Some $26 million will be required to support the battery response over the coming three months, but requirements are likely to rise further based on the impact of this new and dangerous emergency cyclone,” said OCHA spokesperson Jens Laerke.

♦ Receive daily updates directly in your inbox - Subscribe here to a topic.
♦ Download the UN News app for your iOS or Android devices.
madagascar|cyclone

Humanitarians are continuing to support Madagascar in the wake of Cyclone Batsirai which hammered the island nation this past weekend, the UN said on Thursday.