ILO/Fiorente A.
A trader affected by leprosy waits for customers in Addis Ababa, Ethiopia.

More than 100 laws that remain in place around the world which discriminate against people affected by leprosy, should be abolished, an independent UN human rights expert said on Friday, calling it “shameful” that governments continued to legislate against those suffering from one of the oldest diseases known to humankind.

Sunday marks World Leprosy Day, which provides an opportunity to celebrate people who have experienced leprosy, raise awareness of the disease, and call for an end to leprosy-related stigma and discrimination.

The 2022 “United for Dignity” campaign, this year's core theme, calls for unity in honoring the dignity of people who have experienced leprosy.

According to the latest World Health Organization (WHO) figures, provided by 139 countries covering 2020, 127,558 new leprosy cases were detected around the world – a 37 per cent drop in new cases year on year.

Ahead of #WorldLeprosyDay on 30 January, the independent UN expert on human rights and leprosy Alice Cruz called for an end to more than 100 laws globally that discriminate against people affected by the condition.#United4DignityPRESS RELEASE ➡️ https://t.co/q6FYNEs8se pic.twitter.com/6CFW2oPMHa

And some countries even reported a greater than 50 per cent decrease.

However, as diagnosing and reporting have been impacted by the COVID pandemic, the real numbers may be much higher.

Though curable, without early detection and treatment, the disease can potentially lead to irreversible physical impairments and disability.

India’s national human rights commission has stated there are currently 97 discriminatory legal provisions against those affected by leprosy.

And while it has the highest number of cases, India is not alone in maintaining discriminatory leprosy-related laws, with at least 30 other countries also perpetuating them.

Ms. Cruz said that unfair laws – whether actively enforced or not – motivate, authorize and normalize substantive violations, especially against women.

“The mere existence of laws allowing for divorce on the grounds of leprosy have a devastating impact on women, hindering their access to healthcare and justice”, the UN expert said ahead of World Leprosy Day, marked on Sunday.

“By formalizing harmful stereotypes as lawful labels and normalizing humiliation and violence as authorized practices, such laws significantly compromise livelihoods, exclude people affected by leprosy from political and civic participation, and augment the State’s negligence towards this marginalized group”.

The root causes of this legal discriminatory framework are closely connected with the misdiagnosing of leprosy by early modern medicine as a highly contagious disease, according to the Special Rapporteur.

Today, with multidrug therapy, the disease is curable and over the past 20 years, more than 16 million leprosy patients have been treated.

“Strikingly, many of the existing discriminatory laws were enacted long after the discovery of a cure for leprosy in the 1950s”, said Ms. Cruz.

“Some of these laws have been enacted even during the first decades of the 21st century…[and] span the Global North and Global South”.

The UN expert urged as a matter of priority, for States to amend or abolish discriminatory legislation, policies and customs and to adopt comprehensive anti-discrimination laws.

Special Rapporteurs and independent experts are appointed by the Geneva-based UN Human Rights Council to examine and report back on a specific human rights theme. The positions are honorary and the experts are not paid for their work. 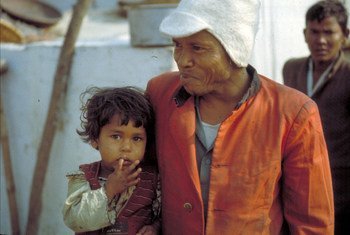 Progress is being made in the fight against leprosy, but millions are still affected by the disease, and many sufferers have to contend with social exclusion. On World Leprosy Day, marked annually on 31 January, experts are calling for an end to ongoing discrimination and stigmatization.