© UNODC/Piotr Zarovski
At a wildlife training session in Viet Nam, a specimen is preserved by the participants.

Despite travel bans and other COVID-19 restrictions, the small team at Viet Nam’s wildlife forensic lab has been bolstering police efforts to crack down on illegal trafficking, with support from the UN Office on Drugs and Crime (UNODC).

The facility is based at the Institute of Ecology and Biological Resources (IEBR), located in the capital, Hanoi, and has undergone a major transformation.

It has now become a world-class wildlife forensic laboratory, through funding provided initially by the United States Agency for International Development (USAID) and, more recently, UNODC.

“Despite the continuous challenges, the Viet Nam laboratory has continued to operate effectively and was given special permission to operate during lockdowns, clearly demonstrating the commitment of the Vietnamese Government to tackle the illegal wildlife trade,” he said.

Last July, customs authorities at the port in Da Nang seized a cargo shipment sent from Durban, South Africa.  The shipment had been declared as wood, but actually contained just over three tonnes of animal bones, including skulls and 52 horns.

Although staff were prevented from travelling to the crime scene due to COVID-19 restrictions, they provided a sampling guide so that customs officers could take one bone from each bag, and extract a sample of each horn, which were then sent back to the IEBR for analysis.

The lab is currently undergoing an audit by the US-based Society of Wildlife Forensic Science to ensure that the work practices are consistent with international standards.

FROM THE FIELD: Taming the illegal wildlife trafficking trade 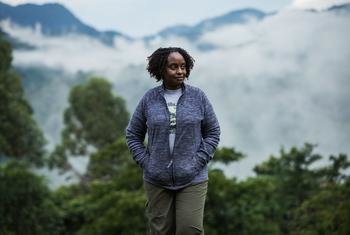 Champions of the Earth: The Ugandan vet protecting people and wildlife

Dr. Gladys Kalema-Zikusoka this year’s Champion of the Earth for Science and Innovation, has spent three decades helping to safeguard some of the world’s rarest primates, including endangered mountain gorillas.