© UNICEF/David Hogsholt
A boy sits in the debris of homes destroyed by Typhoon Rai in the Purok district of the Philippines.

Super Typhoon Rai which ripped through the Philippines over Christmas, has created a massive emergency with huge and ongoing needs, UN humanitarians said on Friday.

Communities are still reeling from the effects of the typhoon, which made landfall in no less than nine places across an area the size of Austria, killing some 500 people.

Relief teams have compared Rai to Typhoon Haiyan in 2013, which killed more than 6,000 people and left four million homeless.

“It just ripped across an area that is enormous, razing houses to the ground,” said Brenda Barton, Country Director for the World Food Programme (WFP).

She said she had seen “no building that was untouched, no house without a roof, all houses without roofs. It was heart-breaking because it was on Christmas Eve, when the whole community comes together and celebrates Christmas and goes to Christmas Mass.”

To support the relief effort, the UN has launched a $107 million appeal. WFP has requested $25 million of this for food, logistics and telecommunications support.

To date, the agency has only received $4.7 million, three weeks since the crisis began, and it is increasingly concerned that the situation for already vulnerable communities is worsening.

“We’ve had continued rains, we’ve had communities that cannot go into houses that are living in evacuation centres and COVID, just like in other parts of the world, is just starting to rip through the Philippines with its highly dense population,” Ms. Barton said, speaking to journalists in Geneva via Zoom.

Latest assessments show that 11 out of the Philippines’ 17 regions were affected by the passage of Rai, which is known locally as Odette.

It was the strongest typhoon to strike the Philippine archipelago in 2021 and disrupted the lives of more than seven million people, according to government data.

In addition to flattening homes, the Super Typhoon upended lives and devastated farming and fishing communities which provide a major source of income and livelihoods, WFP said.

It caused massive electricity and telecommunications outages that continue to affect many areas.

© WFP/Maitta Rizza Pugay
WFP is providing over 70,000 family food packs to various areas affected by Typhoon Rai in the Philippines.

“Advance preparations and early response by the government have been laudable,” said WFP’s Ms. Barton. “Death rates have been relatively low and emergency support is rolling out to communities. But the road to recovery is long and more support will be needed.”

Humanitarians are particularly concerned that the catastrophe will further impact on already dire food security and malnutrition rates in the Philippines.

In some impacted areas such as the Caraga region, “53 per cent of families were unable to afford a nutritious diet”, WFP noted.

Childhood stunting is at 36 per cent regionally, which is beyond the World Health Organization (WHO) threshold, signifying that it is of “very high” public health significance.

“Stunting indicates that children are already suffering from long-term deprivation,” WFP said in a statement. “Their nutritional status puts them at greater risk for diseases and even death.”

When the Super Typhoon hit, WFP immediately supported the authorities by deploying more than 100 trucks to the Department of Social Welfare and Development, to help deliver family food packs, hygiene kits and other non-food relief items.

WFP and the central Department of Information, Communication and Technology have also – for the first time - rolled out innovative mobile emergency telecommunications sets (MOVE), which allow emergency responders to communicate and coordinate quickly in the immediate aftermath of emergencies.

Gender violence fears According to the UN Population Fund (UNFPA), the sexual and reproductive health agency, women and girls have become even more vulnerable to sexual exploitation, human trafficking and gender-based violence since the typhoon hit.

There have been unconfirmed reports of rape, domestic violence and sex in exchange for food, which WFP said “reflects the desperate situation ignited by the scarcity of food and clean water, and the disruption of community support systems and protection mechanisms” caused by the typhoon.

“We’re seeing all of these challenges at the present time, and we know that they are linked. That is why we put women's health, rights, and choices, at the centre of our humanitarian response to the devastation wrought by Super Typhoon Odette,” said Dr Leila Joudane, UNFPA Representative in the Philippines.

This will be supplemented by cash assistance, to help people to recover while also stimulating the economy in places where markets are already up and running.

UN chief concerned over havoc of Typhoon Mangkhut in the Philippines 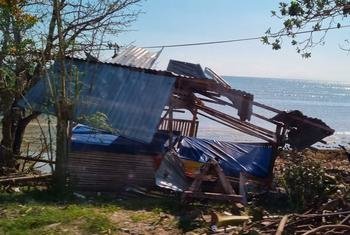 Reports of “utter devastation” caused by Super Typhoon Rai have continued to come in from the Philippines, where the UN is helping respond to urgent needs. 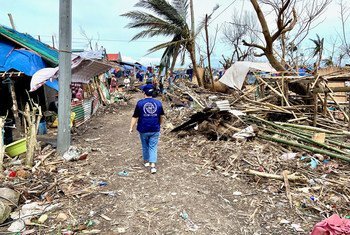 From rising sea temperatures, to deadly and devastating storms and floods, climate change is increasing threats in the southwest Pacific, the World Meteorological Organization (WMO) said in a report published on Wednesday.