Warring parties should never attack children or the services they rely on, a senior official with the UN children’s agency, UNICEF, said on Tuesday, following recent violence and disruption in Syria.

“Only in the past four days – since the new year began – two children were killed and another five were injured in the northwest of Syria as violence escalated,” said Kambou Fofana, Acting UNICEF Regional Director for the Middle East and North Africa.

A New Year no child or family should face.Attacks on children and the services they rely on in Syria must stop.#NotATargethttps://t.co/k8YolcgvIh

“This week, a UNICEF-supported water station came under attack in Arshani village outside of Idlib also in the northwest.  The attack put the station out of service cutting water supply for over 241,000 people, many are internally displaced,” he added.

These developments came just days after UNICEF reported that grave violations against children in both protracted and new conflicts, were on the rise in 2021.

Syria was among countries where thousands of boys and girls “paid a devastating price as armed conflict, inter-communal violence, and insecurity continued,” the agency said on Friday.

Although 2021 data is not yet available, the UN verified more than 26,400 grave violations against children in 2020, including killing and maiming, recruitment, sexual violence, abduction, and attacks against schools or hospitals.

“Children and services catering to them must never come under attack,” said Mr. Fofana. “It has been 11 brutal years of war on the children of Syria. How much longer can this go on?”

UNICEF and its partners continue to support children in the Syrian crisis, to help them cope with the impact of conflict and to resume their childhoods.

Their work includes improving access to education and psychosocial support services, delivering critical humanitarian assistance in hard-to-reach areas, as well as delivering assistance such as hygiene kits, safe drinking water, and screening and treatment of malnutrition.

Amid the COVID-19 pandemic, they have also been sharing prevention and risk awareness messages and materials in efforts to avert further spread of the disease. 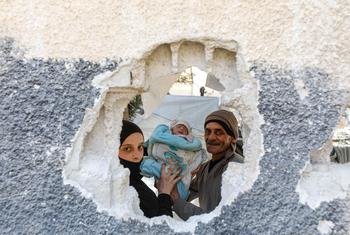