© UNHCR/Aristophane Ngargoune
Intercommunity clashes in Cameroon has forced thousands to flee to Chad.

A flare-up in intercommunal fighting in northern Cameroon has forced tens of thousands of people to flee their homes and brought a halt to aid operations there, the UN refugee agency, UNHCR, said on Friday.

The development is just the latest episode in the difficult relationship between the region’s herders, fishermen and farmers, who have seen the waters and tributaries of Lake Chad shrink dramatically, because of climate change-induced drought.

In Geneva, UNHCR spokesperson Boris Cheshirkov explained that clashes had broken out in recent days in the village of Ouloumsa, following a dispute over dwindling water resources.

The violence then spread to neighbouring villages, leaving 10 villages burned to the ground.

Clashes between herders, fishermen &amp; farmers over dwindling water resources in Cameroon’s Far North forced 30,000+ people to flee to Chad. We call for an end to the violence and the support of the international community to assist the victims &amp; refugees. https://t.co/XjMBzdlKrj pic.twitter.com/tAPuhHffjN

“UNHCR is deeply concerned by renewed intercommunal clashes that erupted this week in Cameroon’s Far North region, displacing thousands inside the country and forcing more than 30,000 people to flee to neighbouring Chad,” Mr. Cheshirkov said. “Since Sunday 5 December, at least 22 people have been killed and 30 others seriously injured during several days of ongoing fighting.”

Fighting then erupted three days later, on 8 December, in the Cameroonian city of Kousseri, a commercial hub with 200,000 inhabitants, according to UNHCR.

In addition to the destruction of the cattle market, Mr. Cheshirkov noted that “at least 10,000 people fled Kousseri to Chad’s capital, N’djamena…only a few kilometres across the Chari and Logone rivers, which mark the border with Cameroon”.

8 in 10 fleeing are women and children

The UNHCR official noted that fully eight in 10 of the new arrivals were women – many of whom are pregnant – and children. “They have found refuge in N’Djamena and villages along Chad’s bank of the Logone river,” Mr. Cheshirkov told journalists during a scheduled briefing.

The UN agency also welcomed Chad’s hospitality towards the new arrivals, even though it is already home to close to a million refugees and internally displaced people.

In partnership with the authorities, Mr. Cheshirkov said that UN agencies and partners were “rushing to support the Cameroonian refugees with emergency shelter and assistance”.

In Cameroon’s Far North, although security forces have been dispatched to the affected areas, the UNHCR spokesperson noted that the situation remained “volatile”, forcing UNHCR to suspend its operations there.

In August, the agency reported an initial outbreak of intercommunal violence in Cameroon that left 45 people dead and 23,000 forcibly displaced, 8,500 of whom have remained in Chad.

In addition to providing immediate emergency aid, UNHCR and the authorities have been leading reconciliation efforts in Cameroon’s Kousseri since last week.

This has resulted in representatives of communities committing to put an end to the violence. “But without urgent action to address the root causes of the crisis, the situation could escalate further,” Mr. Cheshirkov maintained.

“What we see is intercommunal tension between the farmers and the fishermen from one side, and these and Muslim fishermen and farmers, and then the Arabic traders.

“The main reason that this tension has been breaking and getting worse is climate change, because that they depend on the waters of the Logone river, which is one of main tributaries of Lake Chad; Lake Chad has been shrinking over six decades now, it has lost 95 per cent of its surface water.”

So far this year, UNHCR’s funding appeal to help the most vulnerable people in Chad and Cameroon are only around 50 per cent funded.

Over and above the $99.6 million required for operations in Cameroon and the $141 million for Chad, UNHCR appealed to the international community for much greater support to help developing countries adapt to the kind of climate shocks that are behind the crises that the agency is increasingly responding to.

Needs are particularly acute in the nearby Sahel region, where countries including Niger, Mali and Burkina Faso are experiencing climate change-induced temperature rises that are 1.5 times faster than the global average, Mr. Cheshirkov explained. 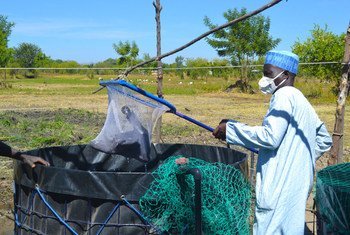 FROM THE FIELD: Cameroon’s displaced, get hooked on fish

Cameroonians who have been displaced by conflict and climate change in the north of the West African country are turning to aquaculture as an alternative source of income, thanks to support from the UN’s Food and Agriculture Organization (FAO).