© UNICEF/Antoine Raab
A dual HIV/syphilis rapid diagnostic test is administered on a pregnant woman in Cambodia.

Dual test kits, which cost less than $1, are now available for pregnant women to stem mother-to-child HIV and syphilis transmission, the World Health Organization (WHO) announced on Monday.

The low cost is possible thanks to a new partnership between the Clinton Health Access Initiative (CHAI), MedAccess and SD Biosensor.

Each year, around 1.3 million women living with HIV become pregnant and just under one million pregnant women are infected with syphilis.

Despite affordable diagnostics and treatment being available, undiagnosed and untreated infections continue to affect the lives of many mothers and their children.

According to WHO, the rapid diagnostic tests are simple to use and can integrate and streamline services. They can also enable more countries to eliminate mother-to-child transmission (EMTCT) of HIV and syphilis.

For Meg Doherty, Director of WHO Global HIV, Hepatitis and STI [Sexually transmitted disease] Programmes, the new pricing is an exciting development.

“It will help more countries adopt dual HIV/syphilis testing and accelerate progress toward EMTCT for both HIV and syphilis and deliver services for key populations, where both infections are common”, she said.

Since 2019, WHO has recommended using these tests. not only as the first line in antenatal care to help countries eliminate mother-to-child transmission, but also as a way to cut costs.

Up to today, the agency has prequalified three different dual HIV/syphilis rapid tests.

Many countries have adopted these recommendations and are introducing the tests, particularly in the African Region.

WHO estimates that last year, major donors and Governments had procured more than five million of these tests – and that the number should continue to rise.

Nigeria, for example, started a pilot programme in 2019 and is now moving toward implementation at the national scale. As the country plans to distribute four million in the coming year.

And yet, despite some important gains, global adoption of dual HIV/syphilis rapid tests in antenatal care is still far from ideal, with only 23 per cent of all countries reporting a national policy. 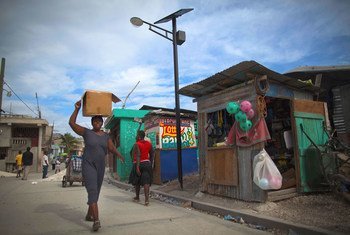 Nearly half of the 1.7 million children worldwide living with HIV were not on treatment last year, the UN programme leading the global fight against HIV and AIDS, UNAIDS, said in a report released together with partners.