“What do we want? Climate justice! When do we want it? Now!” echoed throughout central Glasgow on Friday as thousands of protesters took the streets during the dedicated “Youth Day” at COP26.

Although the march was initially organized by Fridays for Future, the youth-driven movement inspired by Swedish activist Greta Thunberg, people of all ages gathered at George Square to demand climate action.

From small children waving their handmade picket signs, to older adults demanding a better future for those that will come after them, the COP26 host city saw citizen activists in unprecedented numbers rallying to get their message heard.

An even larger march is expected on Saturday.

“I really care about the world that we are passing on to future generations, and what we are doing to the Global South. I live in southwest Wales and climate change is clearly happening, but we don´t even grasp what is happening in so many other parts of the world and I am scared,” she told UN News.

Latin-American Indigenous leaders were also among today’s demonstrations. They were the ones leading the march and several of them sent a loud message to world leaders: stop extracting resources and to ‘leave carbon in the ground’.

“Act now so that we still have a future to live in.”While the World Leaders Summit took place in the Blue Zone this week, we asked visitors to our Green Zone what their message was for global leaders across the river.The youth have spoken. We must act now.#COP26 pic.twitter.com/j2HnhsKwdS

Meanwhile, some activists wore bobblehead masks of presidents and prime ministers and depicted them as being arrested with signs that read “climate criminals”.

Swedish activist Greta Thunberg was the last to appear on the protest’s stage, where she criticized world leaders for their continued “blah, blah, blah” after 26 years of climate conferences and put in doubt the transparency of the commitments they have made during this COP.

“The leaders are not doing nothing; they are actively creating loopholes and shaping frameworks to benefit themselves, and to continue profiting from this destructive system. This is an active choice by the leaders to continue the exploitation of nature and people and the destruction of presents and future living conditions to take place”, she said, calling the conference a “greenwashing event”.

Other Fridays for Future members, speaking to UN News, asked for more participation and better youth representation in the negotiations that are underway at COP26.

“Every year we have been disappointed by COP, and I don’t think this year will be different. There is a sliver of hope but at the same time we don’t see enough action, we can’t achieve anything with just pledges and empty promises”, said a representative of Youth Advocates for Climate Change in the Philippines

“Negotiations are happening and yet we are here in the street, because we haven’t been included. The richest people come in their private jets and take the decisions. We are here and we won’t be ignored. We will make our own space”, another climate advocate added.

The same call was made inside the conference's Blue Zone, where climate activists from YOUNGO, the Children and Youth Constituency of UN Climate Change, delivered to the COP Presidency and other leaders a statement signed by 40,000 young people demanding change.

The statement raised several points of concern, among them inclusion in climate negotiations. It also asked Patricia Espinosa, the Executive Secretary of the UN Framework Convention on Climate Change (UNFCCC), to support young people's efforts to have a paragraph mentioning the importance of the youth included in the final declaration that is expected to be adopted at the end of COP26.

“We will be bringing these issues and demands to the attentions of the delegations, all of them are absolutely reasonable and justifiable,” she vowed during a panel discussion with young leaders.

The statement, which was handed over to Ministers, also asks for action on climate finance, mobility and transportation, wildlife protection and environmental conservation.

“Wherever I have been in the world, I have been struck by the passion and the commitment of young people to climate action. The voices of young people must be heard and reflected in these negotiations here at COP. The actions and scrutiny of young people are key to us keeping 1.5 alive and creating a net-zero future”, said Alok Sharma, COP26 President.

Meanwhile, the UK and Italy, in partnership with UNESCO, Youth4Climate and Mock COP coordinated new global action to equip future generations with the knowledge and skills to create a net-zero world.

The youth are right: the new commitments aren’t enough

The UNFCCC published its latest updates of the national commitments thus far to reduce carbon emissions, and although some advances have been made during the conference, they are still not enough.

“A sizable increase, of about 13.7 per cent, in global greenhouse emissions in 2030 compared to 2010 is anticipated”, the report says.

Before COP, the increase was calculated at 16 per cent, but for the world to be able to curb global heating and avoid disastrous consequences, emissions must be cut by 50 per cent in the next nine years.

For Carla Huanca, a young activist who travelled all the way from Bolivia to be in Glasgow with her friend, the dinosaur “T-Resilient”, another extinction can’t be a possibility.

“We young people will be the ones that will inherit this planet, and that is why it is so important that our voices are heard. We demand government actions so we can all have the planet we want,” she told UN News. 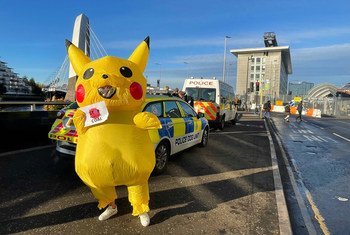 Fittingly, the sun broke through the clouds over Glasgow on Thursday as delegations and participants prepared for ‘energy day’ at COP26, one of the key thematic sessions taking place during the UN climate summit. 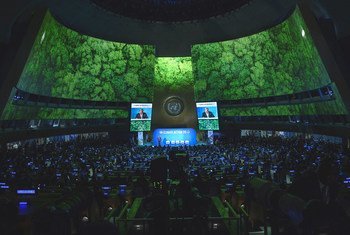