© UNICEF/Zoe Mangwinda
The supply of COVID-19 vaccines to developing countries like the Democratic Republic of the Congo (pictured), needs to be stepped up, according to the UN.

A new strategy announced on Thursday by the World Health Organization (WHO) calls for $23.4 billion to combat inequities in accessing COVID-19 vaccines, tests and treatments, as cases of the disease mount globally for the first time in two months.

The funding for the Access to COVID Tools (ACT) Accelerator – the UN-backed global initiative to end the pandemic - is critical to prevent some five million additional potential deaths, as well as $5.3 trillion in global economic losses.

"This weekend, the leaders of the @g20org countries will meet in Rome. Together, these countries have the ability to make the political and financial commitments that are needed to end this pandemic, and to prevent future crises"-@DrTedros #ACTogether

The strategic plan and budget for the mechanism, a partnership of leading global health agencies established last April, will help the most at-risk countries to secure and deploy these tools between now and September 2022.

WHO chief Tedros Adhanom Ghebreyesus said through its vaccine pillar, COVAX, the ACT Accelerator has so far delivered 425 million doses to 144 countries alone.

Nearly 130 million tests, as well as increased supply of oxygen, personal protective equipment (PPE) and treatments, have also been distributed.

“But the ACT Accelerator has so far been prevented from fulfilling its potential by severe supply and financing constraints,” said Tedros, speaking during the regular press briefing from WHO headquarters in Geneva.

He warned that unless the pandemic is controlled everywhere, the virus will mutate and continue to circulate everywhere.

“The high transmissibility of the Delta variant has reinforced what we have been saying since we set up the ACT Accelerator: vaccines alone will not end the pandemic. We need all tools – vaccines, tests, treatments, PPE and public health measures - to fight COVID-19 and save lives and livelihoods now.”

The spike in COVID-19 cases globally is a reminder that the pandemic is far from over. Numbers are increasing for the first time in two months, largely due to an ongoing rise in Europe, which outweighs declines elsewhere.

Tedros said the pandemic persists mainly because inequitable access to tools persists. As of Thursday, there were 244.8 million confirmed cases worldwide, and 4.9 million deaths.

“If the 6.8 billion vaccine doses administered globally so far had been distributed equitably, we would have reached our 40 per cent target in every country by now,” he told journalists.

Ahead of the G20 summit this weekend in Rome, Tedros issued an appeal to the world’s leading industrial nations, as they “have the ability to make the political and financial commitments that are needed to end this pandemic, and to prevent future crises.”

He urged leaders to fully fund the ACT Accelerator and to support creation of legally-binding global treaty on pandemic preparedness and response.  He further called for creation of a Health Threats Financing Board, supported by a Financial Intermediary Fund, hosted by the World Bank.

Despite lofty rhetoric about global solidarity, the goal of a “people’s vaccine” against COVID-19 is far from being reached, the UN and the International Red Cross and Red Crescent Movement said in a joint statement on Thursday.

Stressing that “it is time for actions to speak louder than words”, the partners have united to reinforce a joint call for global vaccine equity ahead of the G20 Rome summit.

“Profits and short-sighted vaccine nationalism continue to trump humanity when it comes to the equitable distribution of vaccines,” they said.

Although some 48 per cent of the world’s population has received at least one vaccine dose, the number plummets to barely three per cent in low-income countries, and the situation is “particularly worrying” in countries suffering humanitarian crisis.

“It is a humanitarian imperative and our shared responsibility to ensure that lives everywhere are protected, not only in the few countries that have the means to buy protection,” they said.

The partners issued a five-point call to governments, partners, donors, the private sector, and other stakeholders, urging them to scale up COVID-19 vaccine supply and access to COVAX, including through donations, and to increase funding and support so that vaccines can reach all people.

They appealed for strengthening vaccine production and distribution capacity, particularly in low and middle-income countries and accelerating technology transfers, and urged manufacturers to lift all remaining barriers to allow humanitarian agencies access to vaccines. 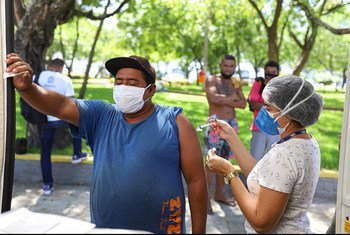 More than half the population of Latin America and the Caribbean has not been vaccinated against COVID-19, a senior official with the regional arm of UN health agency WHO said on Wednesday.