The Secretary-Generally has repeatedly called for the vaccines to be "a global public good", accessible to all people, everywhere.

All UN staffers at UN Headquarters are waiting their turn for the vaccine based on the local rollout plan, and Mr. Guterres is among the first in the Big Apple-based UN family to receive a jab, based on his eligibility - he's over the standard UN retirement aged of 65.

The UN chief spoke to the site manager, Yeashea Braddock, while getting his second innoculation about the importance of fair access to all.

Mr. Guterres said he was privileged to be receiving the vaccine, when "so many areas of the world" were, so far, without access.

Ms. Braddock told the UN chief that sites such as theirs were providing important access to minority communities, but "it's not everything we need", she added, and she said some visitors were hesitant about taking the vaccine.

"Because of misinformation, because of historical mistrust" on the part of African-Americans, she explained, who had been used for testing "without our knowledge" in previous decades.

"For African-Americans - I am one myself - I think it's particularly important for me to be vaccinated, to show my community that's it's safe and that I believe in it, and that this vaccine process was one of the most studied, with our involvement, in proportion to society...We were included in this process."

New York school workers, first responders, public transit workers and grocery workers join the over-65s in the current list of those eligible for shots within the five boroughs of the city.

In December, Mr. Guterres declared that he would happily receive the vaccine in public, and said that, for him, vaccination is a moral obligation: “Each one of us provides a service to the whole community”, he said, “because there is no longer a risk of spreading the disease.”

♦ Receive daily updates directly in your inbox - Subscribe here to a topic.
♦ Download the UN News app for your iOS or Android devices.
secretary-general|COVID-19|coronavirus|vaccines 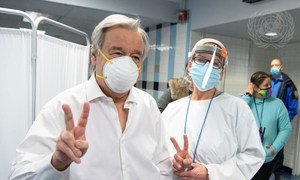 The UN Secretary-General, António Guterres, received his first dose of the COVID-19 vaccine on Thursday, at Adlai E. Stevenson High School in the Bronx, a few miles uptown from UN Headquarters in New York.