UNDP
Reef fish and corals in the waters of the Seychelles archipelago.

Between 2009 and 2018, the continuous rise in sea temperature cost the world 14 per cent of its coral reefs – that’s more than the size of Australia’s reefs combined – a UN-backed report revealed on Tuesday.

In the Sixth Status of Corals of the World: 2020 Report, experts from the Global Coral Reef Monitoring Network, funded by the UN Environment Programme (UNEP), collected data from more than 300 scientists from 73 countries, over a span of 40 years, including two million individual observations.

New #WorldCoralReefStatus report:Between 2009 and 2018, the world lost about 14% of the coral on its coral reefs, which equates to around 11,700 square kilometres of coral, more than all the living coral in Australia.Learn more⤵️#ForNature https://t.co/PlsAC8G8Jy

It revealed that almost invariably, sharp declines in coral cover, correspond with rapid increases in sea surface temperatures, indicating their vulnerability to temperature spikes, and found that this phenomenon is likely to increase as the planet continues to warm.

Dynamic underwater coral cities support up to 800 different species of hard coral and are home to more than 25 per cent of all marine life, according to the report.

Soft corals bend and sway amongst the craggy mountains of hard corals providing additional homes for fish, snails and other marine creatures.

And reefs harbour the highest biodiversity of any of the world’s ecosystems, making them one of the most biologically complex and valuable on the planet.

However, when waters get too warm, corals released their colourful micro-algae, turning a skeletal white colour. Some glowed, by naturally producing a protective layer of neon pigments, before they bleach.

“Bleaching can be thought of as the ocean’s version of the ‘canary in the coral mine’ since it demonstrates corals’ sensitivity to dangerous and deadly conditions”, the Status of Coral Reefs explained.

A shift from coral to algae-dominated reefs, reduces the architectural complexity and structural integrity of these habitats, making them less biodiverse and providing fewer goods and services to humans.

According to the report, there has been a steady decrease in hard coral cover since 2010 with the worst impacts occurring in South Asia, Australia, the Pacific, East Asia, the Western Indian Ocean, The Gulf and Gulf of Oman.

Although coral reefs in more than 100 countries cover only 0.2 per cent of the seafloor, they underpin the safety, coastal protection, wellbeing, food and economic security of hundreds of millions of people, said the report.

And the value of goods and services they provide, is estimated at $2.7 trillion per year, including $36 billion in coral reef tourism.

However, coral reefs are under threat from climate change, ocean acidification, and land-based pollution; as well as sediments from agriculture, marine pollution and overfishing.

“Maintaining the integrity and resilience of coral reef ecosystems is essential for the wellbeing of tropical coastal communities worldwide, and a critical part of the solution for achieving the Sustainable Development Goals (SDGs) under the 2030 Agenda for Sustainable Development”, underscored the Status of Coral Reefs.

Despite these gloomy assessments, there is still hope for coral reefs. They are remarkably resilient and can recover in the absence of large-scale disturbances.

After a 1998 mass coral bleaching event, hard coral cover rebounded to pre-1998 levels within a decade.

“If we halt and reverse ocean warming through global cooperation, we give coral reefs a chance to come back from the brink. It will, however, take nothing less than ambitious, immediate and well-funded climate and ocean action to save the world's coral reefs”, said the report.

This year marks the beginning of the UN Decade of Ocean Science for Sustainable Development and the UN Decade on Ecosystem Restoration, campaigns designed to help protect our seas through scientific advancement and to resuscitate the planet’s declining ecosystems.

Moreover, political leaders will attend the 15th meeting of the Conference of the Parties (CoP) to the Convention on Biological Diversity on Monday and again from 25 April to 8 May next year.

There, world Governments will negotiate a post-2020 global biodiversity framework to map out how humanity will live in harmony with nature in the coming decade.

UNEP
The Sixth GCRMN Status of Coral Reefs of the World: 2020 Animation
♦ Receive daily updates directly in your inbox - Subscribe here to a topic.
♦ Download the UN News app for your iOS or Android devices. 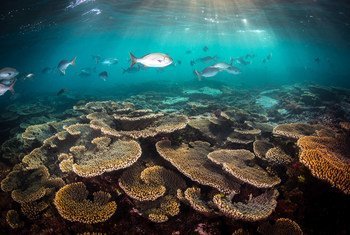 A United Nations body is recommending that Australia’s Great Barrier Reef be included on a list of world heritage in danger, according to a draft report issued on Monday, a move which has been heavily criticized by the Australian Government. 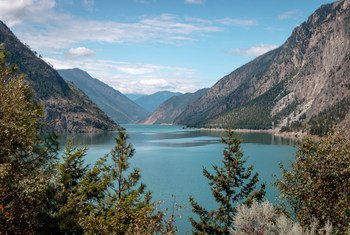 Amidst the triple environmental threat of biodiversity loss, climate disruption and escalating pollution, Secretary-General António Guterres launched “an unprecedented effort to heal the Earth”, on the eve of World Environment Day.