© WFP/Arete/Andrew Quilty
The UN continues to provide humanitarian aid in Afghanistan, despite the political upheaval.

Peaceful protesters in many parts of Afghanistan have been met with an increasingly violent response by the new Taliban authorities over the past four weeks, the UN human rights office (OHCHR) said on Friday, including the use of live ammunition, batons and whips.

OHCHR spokesperson Ravina Shamdasani told reporters in Geneva that on Wednesday, the Taliban issued an instruction prohibiting unauthorized assemblies. A day later, they ordered telecommunications companies to switch off access to the internet on mobile phones, in specific areas of the capital, Kabul.

Ms. Shamdasani said that, as Afghan women and men take to the streets during this time of great uncertainty, “it is crucial that those in power listen to their voices.”

“We call on the Taliban to immediately cease the use of force towards, and the arbitrary detention of, those exercising their right to peaceful assembly and the journalists covering the protests,” she added.

According to OHCHR, protests have been taking place since 15 August and were increasing in number until Wednesday evening’s instruction on the prohibition of unlawful assemblies.

From 15 to 19 August, people gathered in Nangarhar and Kunar provinces to mark national flag-raising ceremonies. Credible reports indicate that during that period, the Taliban reportedly killed a man and a boy, and injured eight others with live fire, in an apparent attempt to disperse the crowds.

On 7 September, during a protest in Herat, the Taliban reportedly shot and killed two men and wounded seven more. That same day in Kabul, further credible reports indicate that the Taliban beat and detained protesters, including several women and up to 15 journalists.

On Wednesday, as a largely female group of demonstrators gathered in the Dashti-Barchi area of Kabul, at least five journalists were arrested and two severely beaten for several hours.

OHCHR added that during a demonstration in Faizabad city in Badakhshan province held by several women, including activists and human rights defenders, the Taliban fired in the air and allegedly beat several protesters.

Ms. Shamdasani recalled that peaceful protests are protected under international human rights law, including under Article 21 of the International Covenant on Civil and Political Rights, to which Afghanistan is a State Party.

She said that “authorities must ensure a safe, enabling and non-discriminatory environment for the exercise of human rights, including freedom of expression and peaceful assembly.”

Blanket restrictions on peaceful assemblies constitute a violation of international law, as do blanket internet shutdowns which usually violate the principles of necessity and proportionality.

Journalists involved in reporting on assemblies must not face reprisals or other harassment, even if an assembly is declared unlawful or is dispersed.

The spokesperson reminded that “there is an obligation to ensure that any use of force in response to protests is a last resort, strictly necessary and proportionate and firearms must never be used except in response to an imminent threat of death or serious injury.”

Rather than banning peaceful protests, she added, “the Taliban should cease the use of force and ensure the freedom of peaceful assembly and expression, including as a means for people to voice their concerns and exercise their right to participate in public affairs.”

Importance of a unified message

Speaking to journalists, in New York, the UN Secretary-General underlined the importance of a unified message about the future of Afghanistan: “We want the Afghan people to live in peace, to be able to stop the dramatic suffering that has existed in the past”, he said. “We want, naturally, the Government of Afghanistan to be an inclusive government, representing the different sectors of the Afghan population.”

Mr. Guterres added that Afghanistan should be a nation with basic human rights, particularly for women and girls, a country that plays a constructive role in international relations, and that it should never again be a sanctuary for terrorism.

Admitting that the UN does not have the leverage that other organizations and countries may have, the Secretary-General reminded those at the briefing that the Organization has been in the country since 1947, and has a key role to play in delivering humanitarian aid to the many Afghans who are in a desperate situation.

Justifying the decision to engage with the Taliban, Mr. Guterres said that it was the UN’s duty to “create the conditions for the possibility of effective humanitarian aid, to reach all areas and to take into account concerns in relation to women and girls”.

It was for that reason that Mr. Guterres sent his Under-Secretary-General for Humanitarian Affairs and Emergency Relief, Martin Griffiths, to Kabul to speak to the Taliban leadership.

The UN has launched a humanitarian appeal for Afghanistan and will host an international high-level event in Geneva next week, to gather support for emergency aid funding.

Some 93 per cent of households don’t have enough to eat, while three in four families are already reducing portion sizes or reduced to borrowing food.

According to phone surveys carried out from 21 August to 5 September in all 34 provinces, families are also buying cheaper, less nutritious foods and parents are skipping meals entirely to allow children to eat.

The number of households resorting to extreme coping strategies has doubled: “a clear sign that many families are teetering on the edge of absolute destitution”, said WFP Deputy Regional Director Anthea Webb.

Before 15 August and the Taliban takeover, 81 per cent of households were already reporting insufficient food consumption and one in three Afghans were considered to be acutely food insecure.

WFP found that families are now consuming protein-rich food less than once per fortnight. Prior to 15 August, it was once per week.

With winter fast approaching and the economy collapsing, Ms Webb said it is now “a race against time to deliver lifesaving assistance to the Afghan people.” 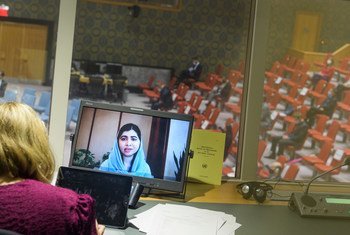 While the choices available in Afghanistan are “not comfortable” ones, continued international engagement and unwavering commitment to the country’s people can help steer the situation to its best possible outcome, the UN’s senior official in Kabul told the Security Council on Thursday.