PAHO/Karen González
Colombia was one of the first countires in the Americas to receive the COVID-19 vaccine through the COVAX Facility.

The head of the World Health Organization (WHO) on Wednesday said the commitment announced by the United States administration to lift vaccine patent protections to help boost global supply, was a “monumental moment” in the battle to end the deadly pandemic.

WHO Director-General, Tedros Adhanom Ghebreyesus, described it on Twitter as a “powerful example of leadership to address global health challenges.”

This is a monumental moment in the fight against #COVID19. The commitment by @POTUS Joe Biden &amp; @USTradeRep @AmbassadorTai to support the waiver of IP protections on vaccines is a powerful example of 🇺🇸 leadership to address global health challenges. pic.twitter.com/3iBt3jfdEr

The UN health chief has for months been urging governments involved in the World Trade Organization (WTO) negotiations over intellectual property rights, to suspend patent rules for those vaccines cleared for emergency use, in an effort to boost vaccine production.

The US had resisted lobbying to waive protections, but on Wednesday Katharine Tai, the US Trade Representative, released a detailed statement, outlining why the Biden Administration was changing its mind:

“This is a global health crisis, and the extraordinary circumstances of the COVID-19 pandemic call for extraordinary measures”, she said.

“The administration believes strongly in intellectual property protections, but in service of ending this pandemic, supports the waiver of those protections for COVID-19 vaccines. We will actively participate in text-based negotiations at the WTO, needed to make this happen.”

The UN Secretary-General António Guterres, welcomed the "unprecedented support" from the US, in a statement issued on Thursday morning via his Spokesperson.

"It opens the opportunity for vaccine producers to share the knowledge and technology that will allow the effective expansion of locally-produced vaccines and can significantly increase the supply to the COVAX facility", said the UN chief.

"We must also ensure that countries have the materials required to produce these vaccines. We are all agreed: none of us will be safe from the virus until all of us are safe."

She outlined that the aim was to get “as many safe and effective vaccines to as many people, as fast as possible.” The top trade official committed the US to expand manufacturing and distribution, and work to increase the raw materials needed to produce the vaccines.

According to news reports, WTO members are due to hold further discussions in the coming weeks, while India and South Africa – which proposed the waiver – are working on revised plans.

The issue of our time

Speaking before the US announcement, the WTO Director-General, Ngozi Okonjo-Iweala, said that the issue of equitable access to vaccines, diagnostics and therapeutics, was “both the moral and economic issue of our time.”

Addressing members at Wednesday’s meeting of the trade body, she said all members needed to share their vaccines, either through the international equitable mechanism, COVAX, or other means, and remove export restrictions and prohibitions.

Manufacturers needed to be expand capacity, and governments should “invest in additional manufacturing capacity for the future."

She called on negotiations over the waiver to continue speedily, saying she was convinced a “pragmatic way forward” was possible. 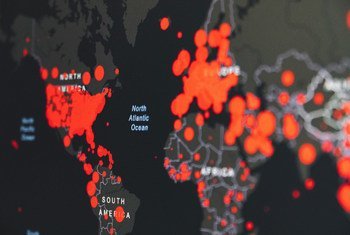 An international hub for pandemic control is to open in Berlin to ensure better preparedness and transparency in the fight against likely future global health threats, the UN health agency announced on Wednesday. 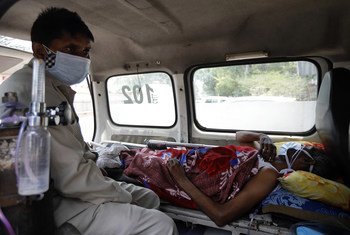 Impacts of the deadly new surge in COVID-19 cases across South Asia are unlike anything the region has seen before, the United Nations Children’s Fund (UNICEF) has said, warning of a “real possibility” that health systems there will be strained to a breaking point, leading to even more loss of life.