FAO/Marco Salustro
Pulses and dried fruits for sale at a market in Rome.

The United Nations is marking World Pulses Day on Wednesday, highlighting their importance not only as a vital source of nutrition, but also for improving soil fertility and warding off crop pests.

Pulses – also called legumes – are the edible seeds of plants from the pea family, cultivated for consumption.

10th February is #WorldPulsesDay! Pulses are not only packed with nutrients but they help combat climate change, increase biodiversity and so much more. 👉https://t.co/gM9DODuav7#LovePulses pic.twitter.com/s05GXSJRsZ

They are a key ingredient in dishes and cuisines globally: hummus in the Mediterranean; baked beans in English diets, or dal in south Asian cuisine.

In many countries, pulses are also a part of the cultural heritage. For instance, in Nepal, Kwati, a soup made with nine varieties of pulses, is consumed during major festivals, and is a central element in the diets of expectant mothers.

Pulses do not include crops that are harvested green (such as green peas or green beans), or those used mainly for oil extraction or sowing purposes.

Pulses are an important source of protein, especially for vegetarians or for people who do not get enough protein by eating meat, fish or dairy. Furthermore, pulses are a healthy choice for meat-eaters, helping cut off excess fat from diets, and contain zero cholesterol. They are also a good source of dietary fibre, vitamins and minerals, especially iron and zinc.

In terms of gram-for-gram nutritional value, pulses are also far cheaper than meats or other sources of protein, offering an economical alternative.

The nitrogen-fixing properties of pulses improve soil fertility, increasing and extending the productivity of the farmland. In many regions, farmers plant legumes along with other crops, a practice known as intercropping, to improve yield and promote soil biodiversity.

The World Pulses Day, to be commemorated annually on 10 February, was established in 2018 by the UN General Assembly, which recognized the importance of pulses as well as their contributions to sustainable food production.

The General Assembly also highlighted the potential of pulses “to further the achievement of the 2030 Agenda for Sustainable Development”, urging efforts to heighten public awareness of their nutritional benefits of eating a variety of food, including pulses.

Nature's nutritious seeds: 10 reasons why you should opt for pulses
How to get kids to eat pulses
Quiz: Do you have a taste for pulses? 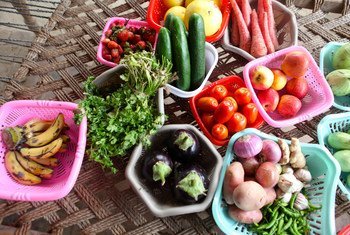 The United Nations is marking 2021 as the International Year of Fruits and Vegetables, spotlighting their vital role in human nutrition and food security, as well as urging efforts to improve sustainable production and reduce waste.