© UNRWA/Marwan Baghdadi
Al-Walaja, a Palestinian village in the West Bank.

Palestinian elections scheduled for later this year will be a crucial step towards unity, the new UN envoy in the region, Tor Wennesland, said on Tuesday in his first briefing to the Security Council.

Palestinian President Mahmoud Abbas issued a decree earlier this month announcing parliamentary and presidential elections will be held starting in May, marking the first vote across the Occupied Territories in 15 years.

"The forthcoming talks in #Cairo to resolve outstanding issues related to the holding of [#Palestine|ian] elections will be important for the planned preparatory process to move forward," UN Envoy Wennesland tells the Security Council.His full briefing 👇https://t.co/FxoeadbpuQ

“The holding of elections in the occupied West Bank, including East Jerusalem and Gaza, will be a crucial step towards Palestinian unity, giving renewed legitimacy to national institutions, including a democratically-elected parliament and government in Palestine”, the Norwegian diplomat told the virtual meeting.

“The United Nations stands ready to support efforts for the Palestinian people to exercise their democratic rights. Elections are a crucial part of building a democratic Palestinian State built on rule of law, with equal rights for all.”

President Abbas was elected in 2005 and his Fatah party controls the Palestinian National Authority, which is based in the Occupied West Bank.  The militant group Hamas, which controls the Gaza Strip, won parliamentary elections held a year later.

Mr. Wennesland said forthcoming talks in Cairo to resolve outstanding issues related to the elections will be important for the preparatory process to move forward.

He added that the election law has also been amended to increase the minimum number of women representatives from 20 to 26 per cent.

“I welcome this step, and join the Secretary-General’s call on Palestinian authorities to take further steps to facilitate, strengthen and support women’s political participation, including as voters and candidates throughout the election cycle.”

Addressing the broader context, the new envoy underscored the UN’s support for a two-State solution for the Palestinians and Israelis, and hopes for a negotiated and lasting peace in the region.

“Despite the significant challenges, achieving the outcome remains possible. And there are opportunities unique to this moment that should not to be missed”, he told the Council.

“I hope that the promise of the recent agreements made between Israel and Arab countries will lead to a situation where a more peaceful Middle East can be realized. However, it requires leaders on all sides to re-engage meaningfully and return to the path of negotiations.”

Shifting to COVID-19 response, Mr. Wennesland outlined the UN’s ongoing support to the Palestinian people during the pandemic, which is taking a staggering toll across the Occupied Palestinian Territories and Israel.

Authorities on both sides have tightened movement restrictions to address the ongoing spread, which has impacted daily life.

The UN and partners have provided the Palestinian government with critical supplies, including personal protective equipment, oxygen therapy machines and testing materials.

In addition, the World Health Organization (WHO) and the UN Children’s Fund (UNICEF) are supporting preparedness for receiving and eventually administering vaccines.

Doses will be procured through the COVAX Facility, the international mechanism aimed at ensuring equal vaccine access by all countries.  Initial allocations are expected to arrive during the first half of the year. 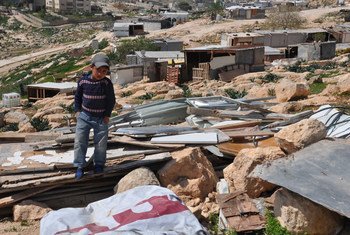 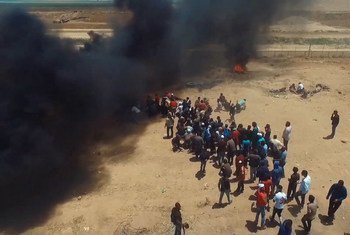