Four United Nations peacekeepers in Mali were killed and five others wounded in an attack by unidentified armed elements on Wednesday, the UN mission in the country has said.

The peacekeepers’ convoy was struck by an improvised explosive device (IED), and the troops then came under attack by unidentified gunmen in the vast Timbuktu region.

Secretary-General @antonioguterres strongly condemns today's attack by unidentified armed elements against a convoy of the @UN_MINUSMA in the Timbuktu region, which resulted in the death of three Ivorian peacekeepers: https://t.co/OPY8vnmumq

A robust response by the peacekeepers forced the attackers to flee, and the wounded personnel were evacuated by helicopter, the UN Multidimensional Integrated Stabilization Mission in Mali (MINUSMA) said in a news release on Wednesday.

The three peacekeepers who lost their lives were from Côte d’Ivoire.

UN Secretary-General António Guterres strongly condemned the attack and called on Malian authorities to bring the perpetrators to justice.

In a statement issued by his spokesperson on Wednesday, the UN chief emphasized that “attacks against UN peacekeepers may constitute a war crime.”

He urged the Malian authorities “to spare no efforts in identifying and promptly bringing to justice the perpetrators of this heinous attack.”

Mr. Guterres also reaffirmed the solidarity of the United Nations with the people and Government of Mali.

The attack against MINUSMA peacekeepers took place the same day as another attack on the UN peacekeeping mission in the Central African Republic (known by its French acronym, MINUSCA), in which a Rwandan peacekeeper was killed.

MINUSMA was established in 2013, after terrorist groups took control of major towns in the country’s north the year before.

Since then, the security situation in Mali – a country roughly the combined size of France, Germany and the UK – has improved owing to efforts of the UN Mission, national security forces and international partners.

However, attacks against civilians and peacekeepers continue, and MINUSMA remains the most dangerous UN operation in the world.

As of December 2020, it suffered 231 fatalities among its civilian and uniformed personnel, of which 134 were the result of malicious acts. An additional 358 personnel sustained serious injuries.

♦ Receive daily updates directly in your inbox - Subscribe here to a topic.
♦ Download the UN News app for your iOS or Android devices.
mali|peacekeeeping

Peacekeepers under attack again in Mali, as one Egyptian blue helmet dies, another seriously injured 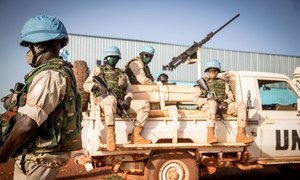 Authorities in Mali are being urged to act swiftly to apprehend those responsible for two separate attacks on Thursday against peacekeepers serving with the UN Mission in the country, MINUSMA.