Authorities in Mali are being urged to act swiftly to apprehend those responsible for two separate attacks on Thursday against peacekeepers serving with the UN Mission in the country, MINUSMA.

An Egyptian peacekeeper was killed, and another blue helmet seriously injured, when an explosive device hit a Mission vehicle in the Kidal region, located in the north.

I am deeply saddened by the death of one of our brave peacekeepers yesterday in the vicinity of #Kidal. Our thoughts are with his family and loved ones, his wounded comrade as well as his brothers and sisters in arms. Our determination to pursue our missions remains unshakeable. https://t.co/9mR3feF8vh

The second incident took place in Timbuktu, where at least one Burkinabe peacekeeper was wounded in an indirect fire attack against the Mission’s integrated camp.

They came just three days after 12 civilians and at least 11 Malian soldiers were killed in attacks in the centre of the country.

UN Secretary-General António Guterres has strongly condemned the attacks, his Spokesman said in a statement issued on Friday.

“The Secretary-General recalls that attacks targeting United Nations peacekeepers may constitute war crimes under international law. He calls on the Malian authorities to take urgent steps to apprehend and swiftly bring the perpetrators to justice”, said Stéphane Dujarric, the UN Spokesman.

The UN chief expressed his deepest condolences to the people and Governments of Egypt and Mali.  He also extended sympathies to the bereaved families, and wishes a swift recovery to the injured.

Attacks on peacekeepers ‘a basis’ for sanctions

In a separate statement, members of the UN Security Council also denounced the attacks, calling for swift investigation and holding the perpetrators accountable.

“Any acts of terrorism are criminal and unjustifiable, regardless of their motivation, wherever, whenever and by whomsoever committed,” they said, underlining that involvement in planning, directing, sponsoring or conducting attacks against MINUSMA peacekeepers constitutes a basis for sanctions designations pursuant to Security Council resolutions.

These heinous acts will not undermine their determination to continue to support the peace and reconciliation process in Mali, added the Security Council members.  They also expressed their condolences to the family of the victim, as well as to Egypt and to MINUSMA, and wished a speedy to the peacekeepers who were injured.

The MINUSMA Force Commander, Dennis Gyllensporre, has also expressed his condolences, and underlined the Mission’s determination to carry out its mandate.

“I am deeply saddened by the death of one of our brave peacekeepers yesterday in the vicinity of #Kidal”, he wrote in a message posted on Twitter on Friday.

“Our thoughts are with his family and loved ones, his wounded comrade as well as his brothers and sisters in arms. Our determination to pursue our missions remains unshakeable”, he added.

MINUSMA, officially the UN Multidimensional Integrated Stabilization Mission in Mali, has been in the country since 2013, following a military coup and the occupation of the north by radical Islamists.

The Mission supports implementation of a 2015 peace agreement signed by the authorities and two coalitions of armed groups.

It is considered the most dangerous UN operation in the world to serve in. 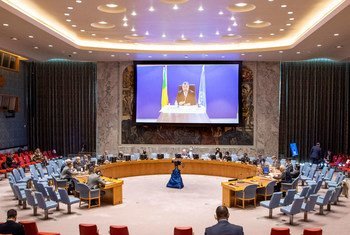