The current political transition period in Mali offers an opportunity to “break out of the vicious circle of political crises followed by coups d'état”, the UN envoy in the country told the Security Council on Wednesday.

“However, it is never too late to reach a minimum consensus on the essentials of peace and stability, because the future of Mali is at stake”, he stated.

He said that several missions and meetings had taken place in Bamako since the August coup and described consultations between the Government and the signatories of the 2015 Agreement on Peace and Reconciliation “encouraging”.

The Malian Government has been seeking to restore stability and rebuild following a series of setbacks since early 2012 that fractured the country, including a failed coup d'état, renewed fighting between Government forces and Tuareg rebels, and the seizure of its northern territory by radical extremists. The weakening of central institutions, loss of confidence in political actors and the rise of religious leaders demanding change, were among the factors leading up to last August's events.

As one positive example of political progress being made, the UN envoy drew particular attention to the “positive dynamics” of key officials who visited the restive city of Kidal to organize a “solemn swearing-in hearing of the new Governor” on 31 December, flagging that “such an event has not taken place in Kidal for almost ten years”.

Mr. Annadif said that despite a hold up in State appointments, the National Transitional Council (CNT) had been established on 3 December, with Transitional President Bah N’Daou having appointed 121 members who are now acting as a de facto government towards restoring full constitutional order.

Serving as an interim parliament that will vote on political, institutional, electoral and administrative reforms, the UN envoy called their role “crucial for the consolidation of democracy and the success of credible elections allowing a return to constitutional order, as provided for in the Transition Charter”.

While pointing to “successes” of the international force, the MINUSMA chief acknowledged that security in border areas of Mali – which remains the deadliest UN peacekeeping mission of all - and in the country’s centre, remains “worrying and unpredictable”.

However, he said that MINUSMA continues to “adapt” to these multifaceted challenges and “strengthen its capacity” to better respond.

The MINUSMA head lauded the efforts of Malian forces to improve their rights performance and underscored that reforms are a key dimension in ensuring the legitimacy of the next elected government.

He reassured the Ambassadors that the foundation has been laid for a successful political transition in the country as well as reliable security arrangements for its diverse regions.

However, he stressed that the transition’s success depends upon “the successful completion of political, institutional, electoral and administrative reforms with the aim of inclusive, credible elections, the results of which will be accepted by the majority of Malians and Malians”. 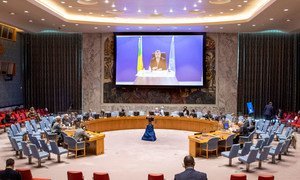