UNFPA/Sufian Abdul-Mouty
Border crossing/Hamdayet Reception Center, 17 November 2020. In the first two weeks of conflict in the Tigray region of Ethiopia more than 30,000 people fled for safety across the Sudaneses border.
8 December 2020
Peace and Security

Fighting between the national army and regional forces began a month ago, and since then, many people have been living with no electricity, running water, banking or communications.

“OCHA has raised concerns regarding the lack of essential medical supplies, which is hampering healthcare workers’ ability to support the population and disrupt critical services, including for women who are pregnant or giving birth”, said UN Spokesperson Stephane Dujarric, speaking in New York.

Meanwhile, two senior UN officials have expressed deep concern over the situation of children caught in the ongoing crisis.

They urged all sides “to do everything possible to better protect children and all civilians, uphold human rights and ensure humanitarian access for the provision of much-needed assistance.”

The fighting in Tigray has forced thousands to seek safety in neighbouring Sudan.  The experts noted that around 45 per cent of those crossing borders are children, according to estimates from the UN refugee agency, UNHCR.

Protection and the provision of emergency support to these children must be a priority for all responding to the crisis, they said, while also welcoming an agreement between the UN and the Ethiopian authorities on humanitarian access.

“I call upon all parties involved to grant all children immediate and unimpeded access to humanitarian assistance”, said Ms. Gamba.

The statement also called for parties to ensure children affected by the conflict are protect from all forms of violence and abuse, including sexual and gender-based violence, trafficking, and recruitment.

Children detained for national security reasons must also be treated primarily as victims, and according to juvenile standards.

“I call on all parties to provide children with all the necessary support, including identification of unaccompanied and separated children, family tracing and reunification, family-based alternative care arrangements where necessary, as well as, access to education and health services, including mental health and psychosocial support”, said Ms. M’jid.

“Children should be given the opportunity to live the peaceful childhood they deserve”, she added.

♦ Receive daily updates directly in your inbox - Subscribe here to a topic.
♦ Download the UN News app for your iOS or Android devices.
Ethiopia|humanitarian access|Children 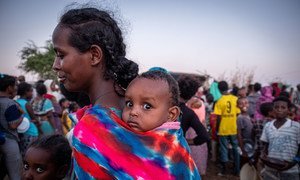