The Handmaid’s Tale: making a drama out of a crisis

George Kraychyk
In the fictional country of Gilead, an environmental disaster has caused infertility amongst women.

The Handmaid’s Tale: making a drama out of a crisis

The Handmaid’s Tale, a critically acclaimed television series which has won 38 Emmy awards, may be about a fictional “alternative reality”, but the show’s creators have gone to great lengths to ensure that references to themes such as climate change, human rights abuses, and refugees, are as real and accurate as possible, by collaborating closely with UN experts.

The TV version of The Handmaid’s Tale is based on the classic 1985 book of the same name by acclaimed author Margaret Atwood, about a dystopian USA, renamed Gilead, ruled by a brutal theocracy in which people, particularly women, have been stripped of their rights.

In the story, an environmental disaster has led to most women becoming infertile, and the small number who are still able to become pregnant are forced to become handmaids, women who are owned by the ruling elite and systematically raped in order to provide them with children.

George Kraychyk
Climate change forms the backdrop to the TV adaptation of the Handmaid's Tale.

Atwood frequently said in interviews that everything described in the book is happening, or has happened, somewhere in the world at some point in history. The producers of the TV version, now filming its fourth season, are mindful of the status of the book’s legacy, and have been careful to take the same approach.

Playwright Dorothy Fortenberry is a co-executive producer and one of the writers of the show. She told UN News that, whilst the book reflects 1980s concerns about the environmental impact of nuclear incidents, and acid rain pollution, the writing team felt that it was important to make climate change the backdrop to the societal collapse that brings about Gilead.

“We researched how things like higher temperatures and plastic pollution could affect fertility (we’re currently seeing a decline in fertility worldwide), and the emergence of climate-related diseases. We wanted the series to feel as grounded in reality as possible.”

One of the ironies of the show is that the authoritarian rulers of Gilead have successfully dealt with many aspects of climate change, banning fossil fuels, driving in electric vehicles, and ending plastic pollution.

“Climate change is an event, it doesn’t have a politics, and it’s not necessarily the case that accepting and dealing with climate change would lead to progressive policies: a pro-environment movement could also be fascist, anti-immigrant and repressive”.

George Kraychyk
The handmaids of the eponymous Handmaid's Tale are valued for their fertility.

Ms. Fortenberry and her colleagues also wanted to ensure that the many human rights issues raised in the show are realistic. One source of guidance was Andi Gitow, who worked in an advisory capacity on the show while on a break from the United Nations, pointing out that the team took great pains to get the details right.

“We started with open-ended conversations, where I would try to answer questions on a range of UN-related topics, such as what it’s really like to live in a conflict zone; what does it mean to lose everything including your home, your rights, your freedom; and how does international law work in practice. I would share my knowledge from the field, and I would also consult with and bring in experts, including from the UN refugee agency (UNHCR), and former tribunals”.

“The team wanted to know, for example, what refugees experience emotionally and practically, and how refugee centres operate. For example, when Emily, one of the main characters, is able to escape Gilead and cross the border into Canada, she’s injured and traumatized. Once brough to a hospital, she’s met by an all-female team who tell her that she’s safe. The scene then plays out, documenting the process in detail. It’s similar for Moira, another refugee character, and we worked with the writers and production designers to help them create as real a setting as possible: what would be on the walls? What would the characters see and hear? Every detail should feel realistic. And when June, the lead character, is finally reunited with her young daughter, Hannah, who was taken from her and given to a Gilead family unable to have children of their own, it’s not the usual Hollywood reunion: on the daughter’s part, there’s a mix of fear, anger and misunderstanding, which is what can often happen in the real world”.

Ms. Gitow also spoke with actors on the show, trying to help them understand how a character may feel in a particular situation, and how they may react.

The power of drama

The international success of The Handmaid’s Tale has meant that millions of people are now aware of the issues contained within the drama, often for the first time.

“Drama is one of the most powerful mediums”, says Ms. Gitow. “Of course, reports, documents and meetings are very important. But drama gives you the ability to reach a mass audience who might not otherwise be exposed to these issues, and might not otherwise seek out information about them.”

While striving to ensure authenticity, the writers avoid pushing a particular agenda, and focus on telling strong stories, with complex, three-dimensional characters coping with extraordinary circumstances.

Hulu/George Kraychyk
Handmaids act as reproductive surrogates in the fictionalized Republic of Gilead.

“If you want to get across a certain point of view, it’s better to write an op-ed”, says Ms. Fortenberry. “That said, we consciously show normal, middle-class women in the US going through some of the experiences that are happening right now to women elsewhere in the world. By doing so, we’re bringing specificity and humanity to some of the horrors taking place, from climate change to gender violence. When you see the effects on one person, you can relate to them”.

“With a drama, you see issues lived and played out by a character you connect with”, adds Ms. Gitow. “You think of yourself, your mother, your child, or best friend in that situation, and it becomes very real. You imagine how you would react in that situation. The power and reach of that is extraordinary”.

The UN and the creative community 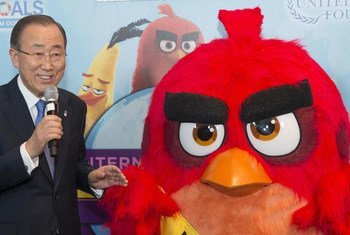 18 March 2016
The United Nations today appointed Red, the leader of the “Angry Birds” mobile game characters, as an envoy to inspire climate action toward a sustainable and happier future for all. 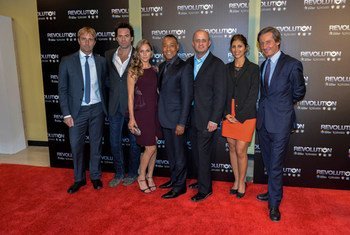 18 September 2013
The fictional concept at the heart of the television series ‘Revolution’ – which picks up 15 years after the start of a worldwide blackout – is the day-to-day reality for billions of people living without power, a reality United Nations field staff helped flesh out for the show’s writers ahead of its second season, which premiered last night at UN Headquarters in New York.