The UN refugee agency, UNHCR, appealed to Ethiopia on Tuesday for urgent access to 96,000 Eritrean refugees in Ethiopia’s Tigray region, saying the month-long conflict in Tigray had left them without vital supplies.

“With our concerns growing by the hour, we are appealing to the federal authorities of #Ethiopia that access should be urgently provided to us in the #Tigray region to reach the desperate people," urges UNHCR @Refugees spokesperson @iBabarBaloch. pic.twitter.com/ImEFiw8VVN

“With our concerns growing by the hour, we're appealing to the federal authorities of Ethiopia that access should be urgently provided to us in the Tigray region to reach the desperate people”, UNHCR spokesperson Babar Baloch told journalists at a regular UN briefing in Geneva.

“The camps will have now run out of food supplies – making hunger and malnutrition a real danger”, he said.

“We are also alarmed at unconfirmed reports of attacks, abductions and forced recruitment at the refugee camps”, Mr. Baloch said, adding that it was not possible to verify current conditions and UNHCR had no had any contact with the Eritrean refugees since the conflict started in early November.

Ethiopia had hosted the Eritreans in four refugee camps for more than a decade, but there were now reports that the Eritreans had been displaced within the Tigray region.

On Monday the UN High Commissioner for Refugees Filippo Grandi launched an appeal for $147 million to meet the needs of more than 43,000 Ethiopians who had fled the fighting in Tigray and become refugees in neighbouring Sudan, with numbers projected to rise to 100,000 by April.

Baloch said the number of Ethiopian arrivals had reached 46,000 but the influx had slowed, with new arrivals reporting checkpoints on the Ethiopia-Sudan road and having difficulty moving around.

♦ Receive daily updates directly in your inbox - Subscribe here to a topic.
♦ Download the UN News app for your iOS or Android devices.
Ethiopia|Tigray 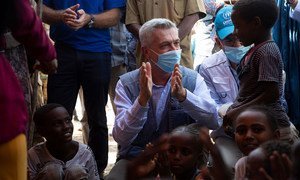 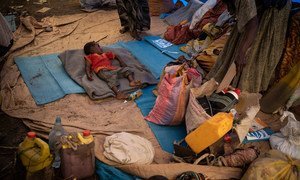