© UNHCR/Olivier Jobard
A young Ethiopian refugee collects a mattress at a transit site in Hamdayet, Sudan. According to UNHCR, the number of refugees streaming into eastern Sudan has surpassed 40,000 since the crisis began.

The UN's top human rights official has called on the parties to the conflict in Ethiopia’s Tigray region to give “clear and unambiguous orders” to their forces not to target civilians, and protect them from assault.

In a statement on Tuesday, Michelle Bachelet, UN High Commissioner for Human Rights, voiced concern that rhetoric on both sides ahead of what it is feared will be a major battle for the regional capital, Mekelle, “is dangerously provocative and risks placing already vulnerable and frightened civilians in grave danger”.

🇪🇹 #Ethiopia: UN Human Rights Chief @mbachelet urges the parties to the conflict in #Tigray to give clear and unambiguous orders to their forces to take constant care to spare and protect civilians from the hostilities. Learn more: https://t.co/SlEkSg2B71 pic.twitter.com/Hwu0oh3rRT

“I fear such rhetoric will lead to further violations of international humanitarian law”, she warned.

“Such rhetoric suggests possible breaches of the cardinal principles of distinction, proportionality and precaution in the conduct of hostilities that are designed to ensure the civilian population is protected.”

There are reports of a heavy build up of tanks and artillery around Mekelle, following the Ethiopian Government’s 72-hour ultimatum to the forces loyal to the Tigray People’s Liberation Front (TPLF) to surrender. The deadline will be reached in a matter of hours.

Later in the day, the UN Secretary-General António Guterres said in a statement he was "deeply concerned over the unfolding situation in the Tigray region", and urged "the leaders of Ethiopia to do everything possible to protect civilians, uphold human rights and ensure humanitarian access for the provision of much-needed assistance. He also calls for the free and safe movement of people searching for safety and assistance, regardless of their ethnic identity, across both national and international borders."

The UN human rights chief’s statement was made in response to reports that TPLF fighters were stationing themselves among the civilian population.

However, this does not give the Ethiopian Government “carte blanche to respond with the use of artillery in densely populated areas” as it seeks to take control of the region, she added, stressing that under international law, parties to a conflict should take all possible measures to protect civilians.

Meanwhile, Ethiopian refugees continue to stream into Sudan, with the number surpassing 40,000 since the crisis began, the UN refugee agency (UNHCR) has reported, adding that humanitarian needs are outpacing the response capacity.

“[We] have been able to deliver and distribute life-saving aid, including food, to more people. But the humanitarian response continues to face logistical challenges and remains overstretched. There is not enough shelter capacity to meet the growing needs”, Babar Baloch, UNHCR spokesperson, told journalists at a media briefing in Geneva.

Mr. Baloch also voiced concern over the situation of civilians, including displaced persons and aid workers in the Tigray region.

He reiterated the call on all parties to enable the free and safe movement of affected people in search of safety and assistance, including across international and within national borders, regardless of their ethnic background.

According to the UN Office for Coordination of Humanitarian Affairs (OCHA), around half a million people, including about 200 humanitarian workers remain in Mekelle.

At the same briefing, OCHA spokesperson Jens Laerke, said that UN and partners in Ethiopia remain ready to provide assistance to people affected by the conflict, adding that “free, safe and unhindered humanitarian access is urgently needed” to allow that to happen.

“To support this plan, about $76 million will still be needed to finance it”, added Mr. Laerke.

The Secretary-General said in his statement that he was giving "the full support of the United Nations to the initiative of the Chairperson of the African Union, President Cyril Ramaphosa of South Africa, to facilitate peaceful solutions. He urges all parties to seize this opportunity to de-escalate tensions." 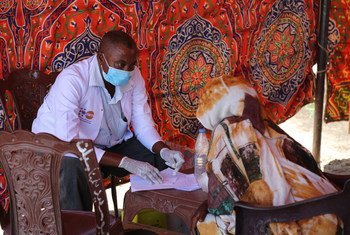 The UN on Monday said it was “extremely concerned” over the safety of civilians across Ethiopia’s Tigray region, as fighting between Government troops and those loyal to the Tigray People’s Liberation Front (TPLF) reportedly continued, with the Ethiopian Prime Minister having called on opposition forces to surrender the capital Mekelle, by Wednesday.