Calling for a “peaceful orderly and credible” election process in a statement issued by his spokesperson, Mr. Guterres also expressed his hope that they might lead to refugee returns “in safety and dignity”.

In August 2017, hundreds of thousands of Rohingya fled a massive military operation targeting the mainly-Muslim minority, in Myanmar’s northern Rakhine state, seeking sanctuary across the border in neighbouring Bangladesh.

Mr Guterres also noted with concern that armed conflict was ongoing “in many areas of Myanmar” with intensifying clashes in Rakhine and Chin states, continuing to take a heavy toll on vulnerable civilians.

Unimpeded humanitarian access for the United Nations and its partners remained crucial, Mr Guterres said, before renewing his appeal for a national ceasefire.

This would allow everyone to focus on combatting the COVID-19 pandemic, the UN chief said.

“At this critical juncture for the people of Myanmar, the Secretary-General reaffirms the support of the United Nations in their pursuit of lives in dignity and peace.”

♦ Receive daily updates directly in your inbox - Subscribe here to a topic.
♦ Download the UN News app for your iOS or Android devices.
Myanmar|elections|Rohingya 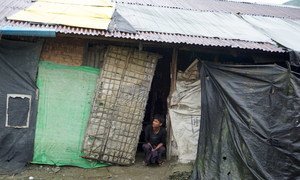 An independent UN human rights expert has called on the Government and military of Myanmar to stop persecuting opposition supporters, including journalists and student protesters, ahead of next week’s general elections. 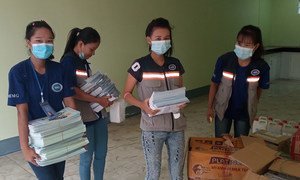 First Person: supporting migrants on the COVID-19 frontline in Myanmar

One of the far-reaching effects of the global lockdown brought on by the COVID-19 pandemic has been the return of migrant workers to their home countries.  The UN is assisting the authorities in Myanmar in facilitating this homeward migration, with a focus on providing for the needs of women.