Unsplash/Abuzar Xheikh
The dome of a Mosque in Pakistan as the sun rises.

A deadly bombing that killed at least seven people at a religious school in Pakistan on Tuesday, has been strongly condemned by the Children’s Fund (UNICEF).

“Education is the fundamental right of every girl and boy, everywhere”, stressed Aida Girma, UNICEF’s Representative in the country. “Schools must never be targeted”.

According to news reports, the lethal blast targeted the Jamia Zubairia religious school, or madrassa, in the Dir Colony Area of Peshawar, while students were studying.

Latest reports indicate that more than 130 were injured, and that most of the 500 or so students who had gathered for a lecture at the school, were between 20 and 30 years old.

Ms. Girma underscored that schools “must remain safe learning environments at all times to protect the growth and healthy development of children, adolescents and young people”.

“We stand together in shock and grief after the heinous attack today on Jamia Zubairia madrassah, Peshawar, where children take classes”, tweeted the UN Office in Pakistan.

“We are appalled by this attack on children while they were in a place of prayer and learning”, it added, offering condolences to the victims and their families.

Peshawar is the provincial capital of Khyber Pakhtunkhwa, bordering Afghanistan. No group has so far claimed that it carried out the attack.

According to news reports, the Pakistan Taliban group has released a statement denying any involvement, condemning the targeting of a religious school as a “reprehensible act”.

This latest incursion comes two days after a bombing in the south-western city of Quetta killed three people.
UNICEF noted that in 2018, there were a string of attacks on a dozen mostly girls’ schools in Pakistan’s Gilgit-Baltistan's Diamer district and a school was also targeted in Chitra. 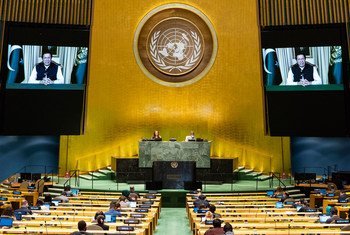 The driving force in international relations must be cooperation, in accordance with the principles of international law, and not confrontation, the Prime Minister of Pakistan told world leaders gathered virtually at the UN General Assembly.