UN rights chief Michelle Bachelet on Tuesday urged Russia to carry out or cooperate with a rapid and transparent criminal investigation into the poisoning of opposition activist Alexei Navalny.

Citing German specialists who said they had “unequivocal proof” that Mr. Navalny was poisoned with a Novichok nerve agent, the UN High Commissioner for Human Rights also highlighted numerous cases of poisoning and “targeted assassination” of Russian citizens in the past 20 years.

This pattern was “profoundly disturbing”, Ms. Bachelet said in a statement, adding that it was “deeply regrettable” that in many cases, perpetrators had not been held to account, leaving victims and their families without justice.

The High Commissioner noted that nerve agents and radioactive isotopes, such as Novichok and Polonium-210, are sophisticated substances that are extremely hard to source.

"This raises numerous questions," she said. "Why use substances like these? Who is using them? How did they acquire them?"

After welcoming the news that Mr. Navalny had emerged from a coma in a Berlin hospital, Ms. Bachelet said that prior to his reported poisoning, the activist had been repeatedly harassed, arrested and assaulted, either by the authorities or by unknown assailants.

“Navalny was clearly someone who needed State protection, even if he was a political thorn in the side of the Government,” Ms. Bachelet continued.

She maintained that “it is not good enough to simply deny he was poisoned and deny the need for a thorough, independent, impartial and transparent investigation into this assassination attempt”.

“It is incumbent on the Russian authorities to fully investigate who was responsible for this crime – a very serious crime that was committed on Russian soil,” the High Commissioner upheld.

The Office of the High Commissioner (OHCHR) was “not in a position to attribute direct blame on anyone…but what we’re making clear is that we don’t believe the proper processes have been carried out in many of these cases, with the result essentially of close to total impunity,” he said.

Mr. Colville noted that before the Navalny incident, the Novichok nerve agent had been linked to the poisoning of Sergei and Yulia Skripal in the UK in 2018. They survived, but an unrelated British woman who came into contact with the deadly substance died, he explained.

“Five Chechen men were also found guilty in her case,” he said. “But again, it’s not entirely clear who …ordered that killing. So this sort of thread of impunity, lack of accountability, lack of transparency runs through many of these cases, and very clearly that’s incumbent on the Russian authorities to sort that out.” 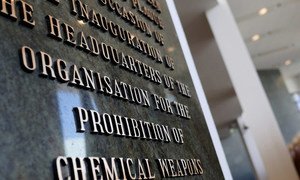 The allegation that Russian opposition leader Alexei Navalny was poisoned by a Cold War-era nerve agent is “a matter of grave concern”, the head of the UN-backed Organisation for the Prohibition of Chemical Weapons (OPCW) said on Thursday.