Syrian opponents meeting in Geneva as part of efforts to find a peaceful end to nearly a decade of conflict in their country have found common ground on which to pursue further discussions, UN Special Envoy for Syria Geir Pedersen said on Saturday.

Speaking to journalists in the Swiss city after a week of “challenging” stop-start talks, interrupted by the discovery that four participants had tested positive for COVID-19 on Monday, Mr. Pedersen insisted that “several areas of commonalities” had been found.

“There are still very strong disagreements and, you know, my Syrian friends are never afraid of expressing those disagreements. But I was also, you know, extremely pleased to hear the two co-chairs saying very clearly that they thought also there were quite a few areas of commonalities. And what I’m looking forward to is hopefully when we meet again, that we will be able to build on those commonalities and bring the process further forward.”

He added: “I am confident that we have been able to build a little bit of confidence, a little bit of trust, and that we can build on this and continue the work that we have started, we would see progress in the work of the committee. But as I have said, progress is happening, it’s of course up to the Syrians themselves within the Committee.”

Hoped-for trust-building gestures from the Syrian Government and the opposition, including progress on the release of abductees and detainees, had been elusive, he said. “The issue of abductees, detainees and missing persons, as you know, has been one of my so-called five priorities from when I started, and it’s an area where I’m afraid we haven’t seen enough progress. But of course, it is my hope that with the continued calm on the groun,d and with progress on the political track, that we could also see some progress on this front.”

Highlighting the keen global interest in the Geneva process, given the presence of several major regional and international nations inside Syria, the Special Envoy reiterated his call for a nationwide ceasefire, beyond the fragile truce largely holding in Syria’s northwest.

“It is calmer and that is obviously conducive to the talks that we are having,” Mr. Pedersen insisted. “But at the same time, I think we have agreed the principle that the talks that are happening here in Geneva do not depend on the situation on the ground. We are, you know, in all my briefings to the Security Council, this is one of the key issues I am addressing, and appealing for the parties to make sure that we develop this calm into what we have called in line with Security Council Resolution 2254, a nationwide ceasefire.”

The third session of the UN-facilitated discussions of the Syria Constitutional Committee's small body convened in Geneva after a nine-month break caused by differences over the agenda, which were resolved by March, and then by COVID-19 restrictions.

Earlier negotiations to decide the make-up of the Committee' s larger body were held in Geneva at the end of October 2019.

The larger body comprises 150 participants: 50 each from the Syrian Government, 50 from the opposition, and 50 from civil society – the so-called “middle third” - who hail from different religious, ethnic and geographical backgrounds.

Under the Committee’s rules of procedure and terms of reference agreed by participants, the small group of 45 people is tasked with preparing and drafting proposals.

These are then discussed and adopted by the larger body, although the 75 per cent decision-making threshold means that no single bloc can dictate the Committee’s outcomes.

Up to the Syrian people

At the start of the week, Mr. Pedersen told journalists that meetings had been “constructive” and that a “clear agenda” for the session had been agreed.

Owing to the interruption caused by the COVID-19 development, Mr. Pedersen explained that he would continue discussing the agenda for the Committee’s next meeting separately with the two co-chairs, Ahmad Kuzbari from the Government and Hadi Albahra for the opposition.

But as the UN-facilitated process belonged to the Syrian people and their representatives, it was up to them set a new date for the next round of talks, the Special Envoy insisted.

He also reiterated his confidence that the process would result in a fair representation of the wishes of all Syrians, in line with its terms of reference agreed by the co-chairs.

“It is stated in the terms of reference that to be able to proceed, in the end we would need consensus or a 75 per cent majority,” he said. “And this is of course something in place exactly to be able so that we can move – that all the sides know that they cannot force their views upon the other – if we are to reach, you know a new constitutional reform, it will have to be built as I said either on a strong consensus or bringing people together with a 75 per cent majority.” 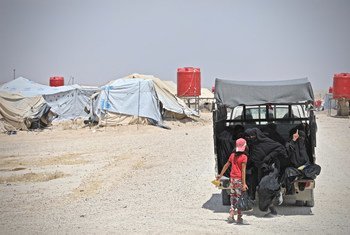 Constitutional reform talks between Syria’s Government and opposition leaders next week in Geneva, offer an opportunity to reconcile differences and establish a social contract with people across the country, who are desperate for progress after more than nine years of war, the Special Envoy told the Security Council on Wednesday.