© UNICEF/UNI340770/
Shefuka (9) studies at home with support from her mother and teacher, while her learning centre remains closed in the Rohingya refugee camps
19 August 2020
Culture and Education

A group of 275 former world leaders, economists and business leaders on Wednesday, urged the G20 group of leading industrialized nations to help stop the pandemic from leaving tens of millions of children from becoming known as the "COVID generation", denied a proper education.

Gordon Brown, the UN Special Envoy for Global Education who also served as UK Prime Minister, was one of the signatories asking G20 heads, national Governments and global financial institutions to urgently ramp up funding to “rebuild education better”.

"We cannot stand by and allow these young people to be robbed of their education and a fair chance in life”, the letter stated.

I’ve joined with 275 other world leaders to call for urgent action from the G20 to address the global education emergency triggered by #Covid19. We cannot stand by and allow these young people to be robbed of their education and a fair chance in life. https://t.co/OgTpMgEY9F

The former leaders also warned that the world's poorest children have not only been locked out of learning, often without internet access, but also denied critical school meals – once a lifeline for 300 million boys and girls – leading to rising hunger.

Citing World Bank estimates, they said that “over the next year overall education spending in low and middle-income countries could be $100-150 billion lower than previously planned”.

“At the very time we need extra resources, education funding is in danger on three fronts”, they added, pointing first to the repercussions of slower or negative growth, which undermines tax revenues, and ess money in almost every country for public services, including schooling.

And finally, the former leaders shone a light on intensifying fiscal pressure in developed countries, which will result in international development aid reductions.

“There is also a danger that multilateral donors, who already under-invest in education, will reallocate funds”, they stated.

To work out these issues, the former leaders called on the G20, IMF, World Bank and regional development banks, “and all countries to recognize the scale of the crisis and support three emergency initiatives”.

They stated that every government should “pledge to protect front-line education spending” and prioritize the needs of the most disadvantaged children through cash transfers to promote school participation.

Next, the international community must “increase aid for education, focusing on the most vulnerable”, through debt relief: “We call for debt suspension with a requirement that the money for debt servicing be reallocated to education and other priority investments for children.”

They also called on the IMF to release a further $1.2 trillion from its global reserves for members to channel towards countries most in need.

“Now is the time for national governments and the international community to come together to give children and young people the opportunities they deserve and to which they are entitled.”

♦ Receive daily updates directly in your inbox - Subscribe here to a topic.
♦ Download the UN News app for your iOS or Android devices.
education|Education Cannot Wait|COVID-19|coronavirus 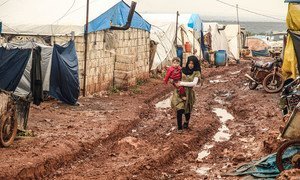