UNICEF/Chris Farber/UNICEF via Getty Images
UNICEF’s ‘Pandemic Classroom’ at the UN Headquarters in New York. Each empty desk and chair represents the million children living in countries where schools have been almost entirely closed.
3 March 2021
Culture and Education

More than 168 million schoolchildren globally missed out on learning in class, as schools in some 14 countries remained largely shut for almost an entire year due to coronavirus-related lockdowns, the UN Children’s Fund (UNICEF) reported on Wednesday.

“As we approach the one-year mark of the COVID-19 pandemic, we are again reminded of the catastrophic education emergency worldwide lockdowns have created”, Henrietta Fore, UNICEF Executive Director, said in a news release, announcing the agency’s findings.

“With every day that goes by, children unable to access in-person schooling fall further and further behind, with the most marginalized paying the heaviest price”, she added.

School closures have devastating consequences for children’s learning and wellbeing - with the most vulnerable paying the heaviest price.

Governments must take all possible measures to get children back in the classroom. Their futures depend on it.

According to UNICEF, nine of the 14 countries, where schools remained mostly closed between March 2020 to February 2021, are in the Latin American and Caribbean region, affecting nearly 100 million students. Of these countries, Panama kept schools closed for the most days, followed by El Salvador, Bangladesh, and Bolivia.

In addition, around 214 million children – one in seven pupils globally – missed more than three-quarters of their in-person learning, while over 888 million continue to face disruptions to their education due to full and partial school closures, according to UN data.

School closures have devastating consequences for children’s learning and wellbeing. The most vulnerable children and those unable to access remote learning are hit even harder, as they are at an increased risk of never returning to the classroom, sometimes forced into child labour and even child marriage, according to UNICEF.

Schoolchildren globally also rely on their schools as a place to interact with peers, seek support, access health and immunization services and a nutritious meal. The longer schools remain closed, the longer children are cut off from these critical elements of childhood, the agency added.

Executive Director Fore called on all nations to keep schools open, or prioritize them in reopening plans where they are closed.

“We cannot afford to move into year two of limited or even no in-school learning for these children. No effort should be spared to keep schools open, or prioritize them in reopening plans”, she highlighted.

UNICEF also urged governments to focus on the unique needs of every student, with comprehensive services covering remedial learning, health and nutrition, and mental health and protection measures in schools to nurture children and adolescents’ development and wellbeing.

Also on Wednesday, UNICEF unveiled ‘Pandemic Classroom’, a model classroom made up of 168 empty desks, each desk representing one million of the children living in countries where schools have been almost entirely closed, as a “solemn reminder of the classrooms in every corner of the world that remain empty”, said the agency.

Behind each empty chair hangs an empty backpack – a placeholder for a child’s deferred potential.

After walking through the installation, set up at UN Headquarters in New York, UN Secretary-General António Guterres called the staggering number of children missing out on valuable education “a tragedy”.

♦ Receive daily updates directly in your inbox - Subscribe here to a topic.
♦ Download the UN News app for your iOS or Android devices.
COVID-19|coronavirus|education 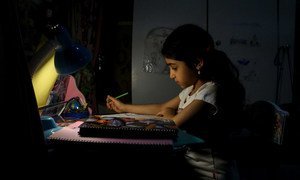 A staggering two-thirds of world’s school-aged children – 1.3 billion children aged 3-17 – do not have internet connection in their homes, preventing them from learning vital skills needed to compete in the modern economy, a new UN report has revealed. 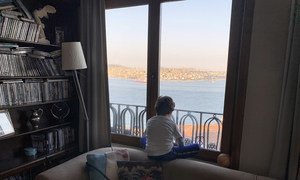