UNCDF
A SafeBoda rider and market vendor use the SafeBoda app to deliver food and supplies during the COVID-19 lockdown in Kampala, Uganda.

Ruth Tindyebwa, a market vendor in the Ugandan capital, Kampala, was badly affected by the government’s lockdown measures, imposed on March 22. Much of her custom came from people walking past her stall on the way to work. After the restrictions were put into place, this source of income dried up. Things have now turned around, however, thanks to a project set up by the UN, in collaboration with a local company called Safeboda.

Safeboda promises users a safer option than the usual “bodabodas”, the motorcycle taxis, often unlicenced, that weave their way through the streets of Uganda and other east African countries.

The company operates in a way that is familiar to users of well-known taxi-hailing platforms, such as Uber or Lyft: users download an app, enter their destination and see the estimated cost of their ride. The company offers assurances that the drivers will be safe, well-trained and professional.

After the Ugandan government enacted its lockdown measures, the UN Capital Development Fund (UNCDF), responded by launching its partnership with Safeboda, creating a new e-commerce platform that connects market vendors to customers.

Orders for produce are placed via the Safeboda app, and paid for, using its mobile wallet feature. The company’s accredited riders then deliver the produce.

The result has been a boost in trade for hundreds of market vendors, regular income for the bodaboda drivers, and a safe way for customers to receive the goods.

Ms. Tindyebwa was one of the first market vendors to sign up to the project: her daily sales are now even higher than they were before lockdown. “The most amazing part is that I can save for my children's school fees on my e-wallet as I wait for the schools to reopen after this lockdown," she says.

‘E-commerce has come and it will never go away’

UNCDF
A market vendor uses the SafeBoda app which connects vendors to households using the SafeBoda transport service during the COVID-19 lockdown in Kampala, Uganda.

The Safeboda scheme is not the only partnership launched by the UN in Uganda. In May, the UN Development Programme, UNDP, joined forces with Jumia Foods, the country’s largest e-commerce company, to create an online platform specifically designed to connect some of the most vulnerable members of the workforce with potential customers.

The initiative is designed to empower those hit hardest in the informal trade sector, and more than 60 per cent of those who have signed up for it are women, young people, and persons with disabilities.

It also helps to connect farmers, keeping alive the flow of products from rural areas to urban markets. As part of the support, UNDP is providing sellers more than 3,000 vendors in five Kampala markets, with smartphones, airtime, and data packages.

At the launch of the partnership in May, Amelia Kyambadde, Uganda’s Minister of Trade, Industry and Cooperatives, declared that she expects it to promote the growth of online commerce. “One of the lessons we have learnt is that e-commerce has come, and it will never go away”, she said.

Elsie Attafuah, the UNDP Resident Representative in Uganda, was equally upbeat, describing the partnership with Jumia as a “safe, convenient and fast service to the citizens of Uganda”, which will boost trade.

“COVID-19 presents not only a health but also a humanitarian and development crisis that is threatening to leave deep social, economic and political scars for years. It is, therefore, important to expand e-commerce to enable business continuity, support livelihoods and enable early recovery from the pandemic”, she added.

Innovating a way out of crisis

One of the aims of such partnerships, is to demonstrate the many benefits of digital services to small businesses and consumers, and encourage further digital innovation, leading to sustainable growth in the Ugandan economy.

In many other ways, the UN is working closely with Ugandan government to turn things around, by using digital tools. 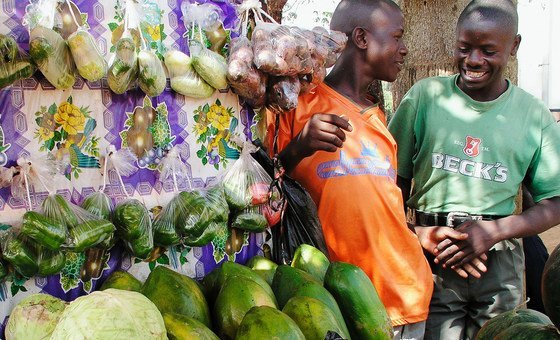 Vendors chatting at a vegetable stand in a marketplace in Kampala, Uganda., by Arne Hoel/World Bank

The UN Safeboda and Jumia schemes are just two examples of the ways in which online commerce can help to kickstart, in a sustainable way that benefits all, the Ugandan economy. Like so many other countries around the world, Uganda is struggling to cope with the devastating effects of the economic crisis brought about by COVID-19.

The World Bank estimates that real GDP growth this year will be less than 2 per cent, compared with almost 5.6 per cent in 2019.

The UN agency for trade, UNCTAD, has made several recommendations, on how to improve the supply of digital services in Uganda, and UNDP is supporting the government in its development of an e-commerce strategy, which has seen new laws have been passed, aimed at improving people’s trust in online transactions.

E-commerce has been identified by the UN as a powerful way to drive growth, boost trade and create jobs, but many developing countries are still lagging behind in this area.

Through initiatives such as UNCTAD’s e-trade for all platform, which aims to coordinate the efforts of NGOs, foundations, and others, to harness the potential of the internet for economic development, it is hoped that the progress seen in Uganda can be replicated elsewhere, as governments attempt to navigate their way out of this unprecedented global crisis.

♦ Receive daily updates directly in your inbox - Subscribe here to a topic.
♦ Download the UN News app for your iOS or Android devices.
UNCDF|unctad|Uganda

FROM THE FIELD: Love in the time of COVID 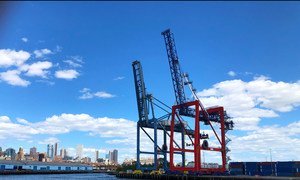 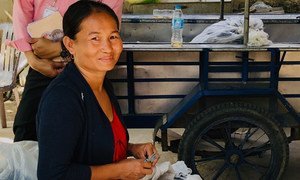