Northern Uganda suffers from a development gap with the rest of the country, with high rates of poverty and unemployment. UN News spoke to Dmitry Pozhidaev, head of the UN Capital Development Fund (UNCDF) office in Uganda, to find out what the agency is doing to improve funding access to individuals and businesses, and put them on the right path to success.

Dmitry Pozhidaev Many UN agencies have a very specific thematic focus: they are dealing with women, children, health care, or other important issues. However, the UNCDF can get engaged in a variety of various thematic areas, provided that there is a financial solution that can be used to address a specific challenge, anything from education to agriculture.

Uganda has a lot of promise.  For example, 50 per cent of all the arable land in East Africa is in Uganda; 75 per cent of Uganda's population are young people below the age of 30.

So, this potentially creates the conditions for Uganda to move towards the achievement of the Sustainable Development Goals, and its own development objectives.

But to unlock that potential, you need to invest into building the systems that would allow the country to use that potential and, among other things, to find and apply various financial solutions and make sure that there is adequate financing for those development plans.

UN News Do small businesses in Uganda find it hard to get access to finance?

Dmitry Pozhidaev Yes. We know that there is a lot of unaddressed demand. The real problem is that in the context of the private sector, we are talking about very inexperienced and very rudimentary business processes and business structures. They do not create enough confidence with the potential financiers –such as banks and equity providers – that those entities will be able to use the funds in the best possible ways, and be able to service their debts.

UN News How are you able to address this problem in the north of the country?

Dmitry Pozhidaev In northern Uganda, we are engaged in several areas. One is supporting local governments and the public sector, in particular at the district level, to find the financial solutions to various public projects. Those public projects may be in the area of climate change adaptation, local economic development, or in the area of forced displacement.

Agriculture employs around 75 per cent of all Ugandans, so it’s important that we move agriculture to the next level, in terms of productivity and competitiveness.

We’re also engaged with the private sector on digital finance and digital economy, to get smallholder farmers, and village savings and loans associations connected integrate them with the formal banking system, and hence improve their access to finance.

UN News You have worked with companies selling solar power services in the north. Why?

Dmitry Pozhidaev Access to electricity is still a challenge in Uganda, and access to grid electricity in many places is not available, particularly in rural areas.

But even in Kampala and in the bigger cities, there are frequent blackouts and interruptions in electricity supply, which has multiple implications on businesses, individuals and government institutions.

Ensuring access to solar provides additional opportunities for businesses, particularly micro and small, and especially in rural areas. Having access to electricity allows those businesses to extend their working hours because now they can work beyond daylight hours.

For individuals, it means lighting, and it allows students to use electronic devices and study longer.

We are working with a company providing solar panels on a pay-as-you-go system. Their customers’ payments are tracked digitally, which means that they can build up a credit score, which will make it easier for them to get loans from the formal banking system.

This is very important in an economy in which 90 per cent of employment is in the informal sector: in the absence of formal records, it's very, very difficult for someone to get access to the formal financial system.

UN News Some of your projects involve funding for MTM and Airtel, the biggest telecom companies in Africa. Why should they receive UN funding?

Dmitry Pozhidaev People often find this surprising. They think that a big company can afford extension into less traditional and more risky areas.

This is not the case, even for very big and financially sound companies like MTM and Airtel; unless the viability of the business case is demonstrated to them, clearly they will not go to areas where they are not currently engaged.

And this was the case with the refugee camps. The telecom companies have serious doubts about the capacity of refugees to buy the products that they offer.

But, by demonstrating the demand and the capacity of the refugees to pay, and facilitating through some relatively small grants, we enabled these companies to expand into refugee camps in northern Uganda. 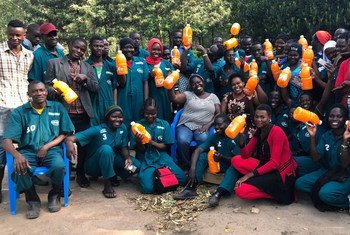 A Ugandan woman entrepreneur who was left with just a wheelbarrow and a red dress, when a business partner ran off with all her money has been recognized with an award by the UN trade agency (UNCTAD) after she grew her company into a nationwide enterprise with five million customers.