‘Heed the calls’ for ceasefire in north-western Syria – UN

© UNOCHA
An internally displaced family lives in a damaged school in the town of Binish in Idlib, Syria.
4 August 2020
Peace and Security

The United Nations expressed concern on Tuesday for the safety and protection of more than four million civilians in north-western Syria, which has been hit with aerial bombardments over the past few days.

Speaking at a virtual press briefing, Deputy Spokesperson Farhan Haq told journalists that in the wake of reports of air attacks and shelling over the past few days, 2.7 million people have been internally displaced.

As a result of the air raids, three people were reportedly killed and seven injured in Bennsh, in Idlib governorate.

“The UN calls on all parties to heed the calls by the Secretary-General for a full ceasefire as an essential measure to enable communities to tackle the COVID-19 pandemic”, Mr. Haq stressed.

Since March 2011, the country has been in the throes of a conflict that has forced more than half of all Syrians to leave their homes.

With 5.6 million Syrian refugees, 6.6 million internally displaced and more than 12 million people in need of assistance, the crisis has caused untold suffering for Syrian women, children and men.

The UN spokesperson reminded all parties, and those with influence over them, of their obligation to “protect civilians and civilian infrastructure as required by International Humanitarian Law and International Human Rights Law”.

♦ Receive daily updates directly in your inbox - Subscribe here to a topic.
♦ Download the UN News app for your iOS or Android devices.
syria|airstrike|IDPs 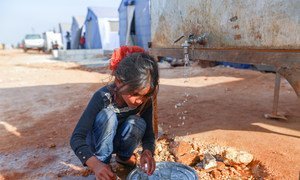 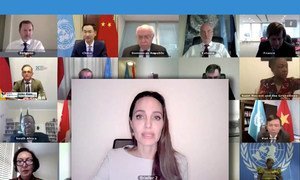