UNHCR/Susan Schulman
Relentless fighting has left much of Syria in ruins.
13 July 2018
Peace and Security

Despite the return of tens of thousands of internally displaced people (IDPs) to Syria following local agreements and changes in territorial control, the United Nations said on Friday that fresh airstrikes have reportedly killed dozens of civilians “in several areas” of the country.

“Our humanitarian colleagues were alarmed by the impact of reported hostilities on civilians in several areas of Syria,” UN Deputy Spokesperson Farhan Haq told reporters at UN Headquarters in New York.

As some 234,500 remain displaced across Syria’s south-west where fighting has intensified for weeks now, one attack hit an IDP site between Bagouz and Susah villages in the country’s eastern city of Deir Ezzour, killing dozens.

“Yesterday, hostilities reportedly continued for the third day in the Akrad mountains area in western rural Idleb governorate and northeast Lattakia governorate in which several people, including a woman and two children, were reportedly killed and many others injured by airstrikes,” added Mr. Haq.

Last week, the UN High Commissioner for Refugees (UNHCR), Filippo Grandi, called the situation in Syria “dire,” painting a grim picture of people struggling without shelter or protection from desert heat and winds, and dwindling food supplies – calling on all those fighting “to cease hostilities.”

According to media reports, the UN’s call came hours after a symbolic victory for Assad’s forces that illustrated the conflict’s turning tides. Syrian State media reported that Government forces had hoisted the national flag over the city of Deraa, in an area that has been controlled by rebels for many years.

♦ Receive daily updates directly in your inbox - Subscribe here to a topic.
♦ Download the UN News app for your iOS or Android devices.
syria|IDPs 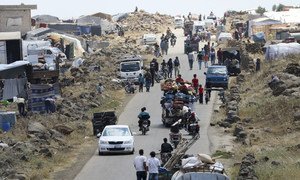