© UNRWA
In Dera’a camp in Syria, young Palestinian refugees continue to study despite the disruption caused by the COVID-19 pandemic..
23 June 2020
Migrants and Refugees

The meeting was held to bridge a $400 million funding gap so that UNRWA can continue providing health, education and social services to more than five million people in three countries and the occupied Palestinian territory.

Thank you to #Jordan's @AymanHSafadi 🇯🇴 & #Sweden's @MinisterPeterE 🇸🇪 for hosting today's Pledging Conference for @UNRWA and to SG @antonioguterres for your leadership in marshaling support + collective solidarity #forPalestinerefugees
https://t.co/9TztskZSud

“Every day, UNRWA is contributing to human development and stability in an increasingly volatile and challenging context,” said UN Secretary-General António Guterres, speaking from New York.

Not only does the agency provide a lifeline for millions of Palestine refugees, he continued, it is also critical for regional stability.

UNRWA -- officially the UN Relief and Works Agency for Palestine Refugees in the Near East -- was established following the 1948 Arab-Israeli conflict.

It has operations in Gaza and the West Bank, but also in Lebanon, Jordan and Syria, funded almost entirely by contributions from UN Member States.

New chief Philippe Lazzarini took charge on 18 March, or just one week after the COVID-19 pandemic was declared.

He said the crisis has come as the Middle East enters “a period of renewed uncertainty”, with Israel threatening to annex parts of the West Bank and Lebanon facing  economic chaos, while the “seemingly endless” Syrian conflict rages on.

“In an unpredictable and unstable environment, we need, more than ever, a predictable and stable UNRWA,” Mr. Lazzarini told the conference, which was co-organized by Jordan and Sweden.

“But our greatest challenge is our financial stability. We are operating at full capacity with inadequate resources.”

Over the past five years, UNRWA has battled deep budget cuts, which has led to $500 million in savings. But Mr. Lazzarini said there is nowhere left to trim without affecting the quality of its services.

“Year after year, month after month, UNRWA is on the edge of a financial collapse. This cannot continue,” he stressed, urging countries to take steps, including raising their annual contributions.

“Any reduction in UNRWA’s services will only cause more suffering for a people that have suffered for more than any people should have to endure,” he stated.

Meanwhile, Sweden has contributed some $55 million to the agency this year so far, the Minister for International Development Cooperation reported.

Peter Eriksson said until there is a solution to the situation of Palestinian refugees, “we have a shared responsibility to support UNRWA.”

♦ Receive daily updates directly in your inbox - Subscribe here to a topic.
♦ Download the UN News app for your iOS or Android devices.
UNRWA 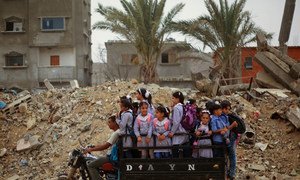