Without funds, ‘no choice’ but to suspend most aid flights, warns WFP

Without funds, ‘no choice’ but to suspend most aid flights, warns WFP

A critical warning was issued by the UN’s World Food Programme (WFP) on Friday, declaring that it may soon have “no choice” but to suspend “most” of its critical aid flights, because of a lack of funding.

WFP has been operating such flights to some 132 countries, as travel bans and closed borders in many parts of the world have caused logistics nightmares for the delivery of humanitarian aid and personnel.

With much of the 🌍’s commercial transport grounded, WFP has been helping @WHO & others to move passengers and health supplies to countries isolated by #COVID19 pandemic.🚨A critical lack of funds may force us to stop this life-saving transport service: https://t.co/lM0GUaOFZ0 pic.twitter.com/H2Rgn4HVW9

Unless a “substantial injection of funds” is provided by donors by early July, WFP spokesperson, Elisabeth Byrs, said that it would be forced to ground most of its humanitarian air fleet by the end of next month:

“I think all the operations will be affected, because you need money to get to charter a plane for passenger and medical evacuation, or to transport cargo”, she told reporters in Geneva.

“I know that slowly and slowly, step by step, some commercial flights will resume and we use them as often as it’s possible”, but there will still be countries, especially in regions like the Middle East, “where it’s badly needed”, she added.

WFP operates a network of so-called global aid hubs in China, Belgium and the United Arab Emirates, near the locations where supplies are manufactured.

The WFP aviation service has, over recent months, transported huge volumes of urgently-needed medical supplies – including Personal Protective Equipment (PPE), masks and ventilators – as well as staff from scores of aid organisations. WFP also transports goods on behalf of other UN agencies and non-government organisations, by road and by sea.

Response on a scale ‘never seen before’

“This is a response on a scale never seen before”, said Ms. Byrs, in reference to the emergency supply system, “and with the pandemic showing no signs of unabating it is crucial that the response doesn’t stop now when it is needed most”.

WFP’s Byrs warned of severe consequences should the humanitarian flights cease. Without the service, she warned that “hospitals in developing countries would not receive desperately needed medical supplies…Health centres serving pregnant women and undernourished children, would not receive life-saving nutritional products for the prevention and treatment of malnutrition.”

Since 1 May, the World Food Programme has completed 375 cargo and passenger emergency flights, delivering “more than 2,500 responders from more than 80 aid organisations flown to destinations where their assistance is urgently needed”. Byrs added that “I could also tell you that we have provided enough cargo to fill 120 jumbo jets, waiting to be transported in coming weeks”.

As part of this system, WFP also has access to a global network of contracted air ambulances which have so far carried out nine medical evacuations of UN staff. 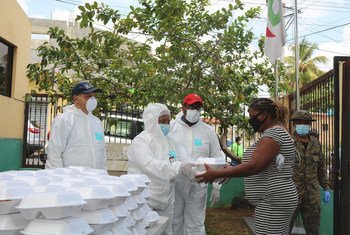 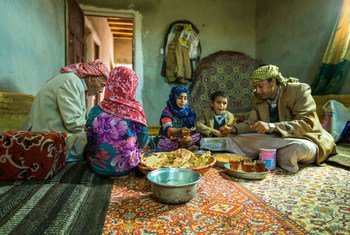