© UNICEF
Doctors at a quaratine centre in Aden, Yemen, have received PPE supplies from UNICEF.
22 May 2020
Humanitarian Aid

Speaking at a virtual press conference in Geneva, Jens Larke, spokesperson for the UN Office for the Coordination of Humanitarian Affairs (OCHA) said Yemen was “really on the brink right now”, with teams on the ground “talking about having to turn people away because they do not have enough oxygen, they do not have enough Personal Protective Equipment (PPE)”.

#Yemen: COVID19 cases increased by 325% over a week w/ an alarming fatality rate of 15.9%.
Aid agencies are scaling up the response on the basis that community transmission of COVID-19 is taking place across the country.
Read more in our #COVID19 snapshot: https://t.co/GqnUjPCXaB pic.twitter.com/mUQ6bdJQNp

He warned that the numbers of infections being reported were worrying, but the UN is now “working on the assumption that there is widespread communal transmission going on”.

The civil war in Yemen metastasized in 2014 when rebel Houthis, known officially as the Ansar Allah movement, took control of Yemen’s north and captured the capital Sanaa, forcing the UN-recognised government there to flee to Aden. Since 2015, a Saudi-led coalition of mostly Arab countries has been battling the Houthi rebels to reinstate full Government control, drawing in other nations to the conflict.

With only half of Yemen’s health facilities fully functioning, funding for the country’s aid operation is crucial, with up to $2 billion required until the end of the year. The UN and Saudi Arabia will co-host a virtual pledging event on 2 June to support fund raising.

“We are heading towards a fiscal cliff”, said Mr. Laerke. “If we do not get the money coming in, the programs that are keeping people alive and are very much essential to fight back against COVID-19, will have to close”, he warned.

“And then, the world will have to witness what happens in a country without a functioning health system battling COVID-19, and I do not think that one will see that”.

More than 30 key UN programmes risk closing in the coming weeks due to lack of funding. Coronavirus Rapid Response Teams are funded only for the next six weeks.

According to the World Health Organization’s (WHO) latest figures, Yemen has 184 cases and 30 deaths.

However, “the actual incidence is almost certainly much higher”, said the OCHA spokesperson. “Tests remain in short supply, aid agencies in Yemen are operating on the basis that community transmission is taking place across the country, and only half of the health facilities are fully functioning. Yemen’s health system needs significant assistance to counter the threat. Humanitarian aid agencies are scaling up outreach, prevention and case management. “

Some 125 metric tons of supplies have arrived, while over 6,600 metric tons of tests, personal protective equipment and Intensive Care Unit (ICU) supplies are in the pipeline.

However, oxygen and PPE are more urgently needed. Preserving large-scale existing aid programmes in health, water and sanitation, nutrition and other sectors also offers an essential defence against infection for millions of people.

A UN flight arrived in Yemen’s capital Aden on Thursday, with more international staff on board.

In a message to all Yemenis as the holy month of Ramadan draws to a close, the UN Special Envoy, Martin Griffiths, passed on his heartfelt wishes: “May the spirit of Eid guide us all to achieve sustainable peace and stability for all men, women and children in Yemen, redirect the country toward reconciliation and recovery, and pave the way for a better future”, he said.

“Today, I urge the parties to forgo war and division and build on points of convergence. I call on them to join efforts to respond to the COVID-19 outbreak and turn the tide for the sake of the people of Yemen.”

♦ Receive daily updates directly in your inbox - Subscribe here to a topic.
♦ Download the UN News app for your iOS or Android devices.
Yemen|coronavirus|COVID-19 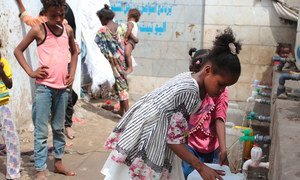 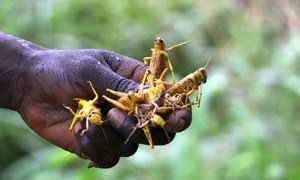