Unlike any global health crisis in the 75-year history of the United Nations, the coronavirus pandemic is “spreading human suffering, infecting the global economy and upending people’s lives”, he added.

WATCH LIVE: ⁦@antonioguterres⁩ takes questions on the #COVID19 pandemic and stresses the importance of global solidarity in response to #coronavirus crisis. https://t.co/So8QVjnBy3

Calling for global solidarity, Mr. Guterres said: “Our human family is stressed, and the social fabric is being torn. People are suffering, sick and scared”.

And as country-level responses cannot single-handedly address the global scale and complexity of the crisis, he maintained that “coordinated, decisive and innovative policy action” is needed from the world’s leading economies.

Mr. Guterres said that he looks forward to participating in the G20 leaders’ emergency summit next week to respond to the pandemic’s “epic challenge”.

“My central message is clear”, he spelled out: “We are in an unprecedented situation and the normal rules no longer apply”.

Indicating that “we are at war with a virus”, the UN chief stressed that creative responses “must match the unique nature of the crisis – and the magnitude of the response must match its scale”.

And although COVID-19 is killing people and attacking economies, by managing the crisis well, “we can steer the recovery toward a more sustainable and inclusive path”, he said.

“I call on world leaders to come together and offer an urgent and coordinated response to this global crisis,” he said.

The UN chief said that tackling the health emergency was his number one concern and advocated for scaled-up health spending to cover, among other things and “without stigma”, testing, supporting health care workers and ensuring adequate supplies.

“It has been proven that the virus can be contained.  It must be contained”, he said, advising to move from a country-by-country strategy to a “coordinated global response, including helping countries that are less prepared to tackle the crisis”.

“Global solidarity is not only a moral imperative, it is in everyone’s interests”, he stated and urged Governments to fully meet the World Health Organization’s (WHO) appeals, saying, “we are only as strong as the weakest health system”.

Global solidarity is not only a moral imperative, it is in everyone’s interests -- UN chief

As the second crisis priority, Mr. Guterres pointed to social impact and the economic response and recovery.

He cited a new International Labour Organization (ILO) report projecting that workers could lose some $3.4 trillion in income by year’s end.

But the world is not experiencing an ordinary shock in supply and demand, “it is a shock to society as a whole”, he said.

“Most fundamentally, we need to focus on people – the most vulnerable, low-wage workers, small and medium enterprises” explained the UN chief. “That means wage support, insurance, social protection, preventing bankruptcies and job loss”.

He elaborated that “the recovery must not come on the backs of the poorest – and we cannot create a legion of new poor” and pushed for supporting informal economy workers and countries less able to respond.

Appealing for a global financial commitment, he noted that the International Monetary Fund (IMF), World Bank and other international financial institutions would play a key role.

He also spoke of the pandemic’s impact on women, saying that they are “disproportionally carrying the burden at home and in the wider economy” and on children, noting that more than 800 million are currently not in class, “many of whom rely on school to provide their only meal”.

“As people’s lives are disrupted, isolated and upturned, we must prevent this pandemic from turning into a crisis of mental health”, the Secretary-General continued, indicating the need to maintain support programmes for the most vulnerable, underlining that “humanitarian needs must not be sacrificed”.

Against this backdrop, Mr. Guterres final point was that we have a responsibility to “recover better”.

“We must ensure that lessons are learned and that this crisis provides a watershed moment for health emergency preparedness and for investment in critical 21st century public services and the effective delivery of global public goods”, he said.

Pointing to the 2030 Agenda for Sustainable Development and the Paris Agreement on Climate Change, he concluded: “We must keep our promises for people and planet”. 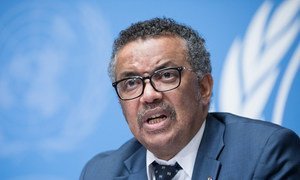 Just 60 days after the genetic sequence of COVID-19 was shared by China, the first vaccine trial has begun, the UN health chief said on Wednesday, calling it “an incredible achievement” and urging the world to maintain “the same spirit of solidarity” that has helped fight Ebola. 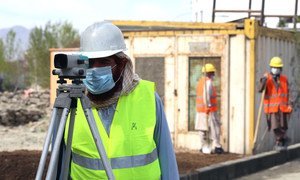 As dire forecasts about the global economy add to the anxiety surrounding the COVID-19 pandemic, the UN’s labour agency (ILO) on Thursday offered a range of urgent measures, which, if governments act quickly, can help to protect workers in the workplace, stimulate the economy and save millions of jobs.