Liz Throssell, spokesperson in the Office of the High Commissioner (OHCHR), said rights chief Michelle Bachelet, had noted “people who are already barely surviving economically, may all too easily be pushed over the edge by measures being adopted to contain the virus.”

Governments must act to reduce negative consequences on people of measures designed to impede spread of #COVIDー19.

Meanwhile, as record temperatures continued in the northern hemisphere, the World Meteorological Organization (WMO) indicated that it was still too early to say whether the global epidemic might lead to a drop in greenhouse gas emissions.

According to the World Health Organization, the number of confirmed cases of COVID-19 has neared 100,000 worldwide, with some 3,300 deaths and more than 80 countries now affected.

Since the virus emerged in central China in December, WHO has urged countries repeatedly to adopt infection containment measures without delay, as these will give health services more time to prepare for a worst-case scenario. “This is not a drill…This is a time for pulling out all the stops,” Dr Tedros Adhanom Ghebreyesus, WHO Director-General said on Thursday.

Be prepared for ‘unintended consequences’

Echoing the need for swift action from all countries facing the global threat - based on her past experience as a medical doctor and as President of Chile - Ms. Bachelet also cautioned that Governments needed to be ready “to respond in a range of ways to unintended consequences of their actions aimed at the coronavirus. Businesses will also need to play a role, including responding with flexibility to the impact on their employees.”

This is not a drill…This is a time for pulling out all the stops - Dr Tedros Adhanom Ghebreyesus, WHO Director-General

The High Commissioner’s statement added: “We’ve got lockdowns, quarantines and other such measures to contain and combat the spread of COVID-19. They should always be carried out in strict accordance with human rights standards and in a way that is necessary and proportionate to the evaluated risk.”

Then, as on Friday, she urged Member States to protect society’s most vulnerable citizens from the health threat posed by COVID-19, and also from any stigma faced by those who had contracted the respiratory disease.

Most at risk are already marginalised

The most vulnerable are those on low incomes, isolated rural populations, people with underlying health conditions, people with disabilities and older people living alone or in institutions, the High Commissioner explained.

“The High Commissioner is not speaking out about specific countries”, Ms. Throssell said. “What she’s doing is making a universal call to Governments to really consider the impact on economic and social rights by the steps they take – that’s why she’s saying it’s so important for human rights to be at the front and centre.”

Ms. Throssell added: “There are plans in different countries to tackle crises, but I think we all would agree it is somewhat unchartered. And that’s why she’s encouraging States to share information on good practices; steps that they have taken to mitigate, to alleviate the impacts, the effects of the steps they take; steps that are in many cases extremely necessary to combat, to contain COVID-19.”

In a related development, the World Meteorological Organization (WMO) said that although the coronavirus would likely have an impact on greenhouse gas emissions and global warming because of the expected global economic slowdown, it was too soon to say how great that impact might be.

What is clear is that “2020 has started out where 2019 left off, with record temperatures. It was the warmest January on record (in Europe)”, said WMO spokesperson Clare Nullis, citing data released on Thursday by the Copernicus European Union Climate Change Service.

“Obviously, the impact on carbon dioxide emissions will depend on the global economic slowdown as a result of the coronavirus,” Ms. Nullis added, noting that it was still “early days. A lot depends on…the repercussions on international transport.” The international aviation industry is reportedly facing a $113 billion loss in sales due to the virus this year, according to projections.

Any future assessment of the virus’s impact would have to drill down into data on global energy consumption, the WMO spokesperson explained.

“Any sort of depression in economic activity…reduction in electricity production from coal-powered plants, a reduction in transport, will make a difference”, Ms. Nullis said. “But we also need to look at efficiency gains. If these plants are running at half-capacity, or if you’ve got planes flying which are a quarter full, that’s not really going to make a big impact.”

Go to our special page for full coverage of the coronavirus outbreak
♦ Receive daily updates directly in your inbox - Subscribe here to a topic.
♦ Download the UN News app for your iOS or Android devices.
coronavirus|human rights|health 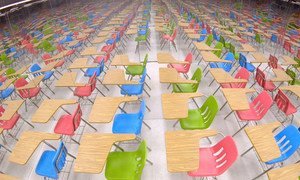 School closures in 13 countries linked to the COVID-19 virus epidemic have disrupted the education of more than 290 million students, a record number, the UN education agency UNESCO said on Thursday. 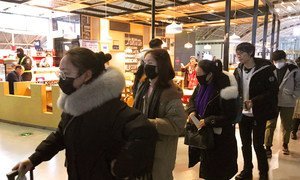