As a “massive year for gender equality”, Executive Director Phumzile Mlambo-Ngcuka said 2020 was all about “Generation Equality”, in which “we’re mobilizing to realize women’s rights, and to mark 25 years of implementing the Beijing Platform for Action” – the historic and landmark gender equality plan drawn up in the Chinese capital.

Generation Equality is focussing on issues facing women across generations, with young women and girls at the centre.

“We don’t have an equal world at the moment and women are angry and concerned about the future”, she said. “They are radically impatient for change. It's an impatience that runs deep, and it has been brewing for years”.

Ms. Mlambo-Ngcuka underscored that girls are disappointed with “the stewardship of our planet, the unabated violence directed against them and the slow pace of change in fulcrum issues like education”.

“My greatest impatience is with unmoving economic inequality”, calling it “a driver of repeating poverty”.

She asserted that policies are needed that promote equality in childcare responsibilities and provide State support to families, and those who work in the informal economy.

Though “radically impatient”, Ms. Mlambo-Ngcuka said: “We are not giving up”.

She cited as cause for hope, growing support in tackling gender-bias barriers; a “driving will” for change across generations and countries; and that the last 25 years “have shown us what is needed to accelerate action for equality”.

Lin Qi
A woman measures products at a ceramic tile factory in Kenya.

Liberian peace activist Leymah Gbowee drew loud applause from delegates at the General Assembly hall celebration. Having worked with former child soldiers in Liberia, she shared a conversation she had had with a 14-year-old amputee who had been nine when he was recruited.

In a stark revelation of how women are sometimes viewed, he admitted to having committed rape many times saying, “isn’t that what women were made for”?

The activist also explained how the term “just women”, is used to “underrate and undervalue the work of women” and downplay their significance “on a daily basis”.

“We can’t even begin to have conversations about our human security needs because our values have been taken away”, she underscored. 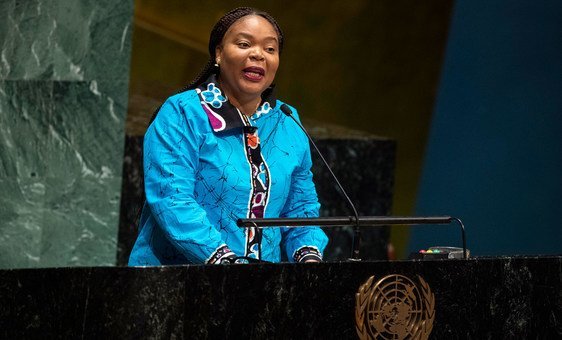 “‘Just women’ shuts the door firmly on any idea or intention to have a conversation about equality”, but the conversation must be held, she underscored.

Ms. Gbowee stressed that in our unjust and unequal world, gender equality must be more than just numbers, spelling out: “Equality is linked to our collective humanity…to peace and justice”.

She maintained that women’s right require actionable, radical transformation through political will, financial resources and ownership.

In closing, the passionate activist urged women to “reclaim the spaces” they have lost.

“It is time for us to own our issues, we must own our agenda, we must own our narrative…the struggle for equality is a long way ahead, but with young women on our side, we can surely win”, concluded Ms. Gbowee.

Women on the front lines

Taking the podium, the youngest female Prime Minister in the world, Finland's Sanna Marin said that her country promotes gender equality as a cornerstone of society.

Turning to inequalities in the labour market, she maintained that “the digital gender cap poses a serious threat to the continued advancement of women and girls”. And the only way to change this is “to get more girls coding, more women into tech, and more women into office where they can exert influence.

In support of all women and girls’ rights, she said “I will not walk back on the progress we have made…and I will push back on anyone who claims that women do not need to be present in government changes and boardrooms”.

Lin Qi
A woman in Kenya receives training at an engineering workshop.

Inspired by climate activist Greta Thunberg, 14-year-old Alexandria Villaseñor has staged a climate strike every Friday – for the past 65 weeks.

She said the wildfires engulfing her native California were a catalyst, noting that women are leading the climate movement and “creating the solutions we need for the climate crisis”.

Meanwhile, the Chair of the Commission on the Status of Women, Mher Margaryan, said: “Our world will never be at peace so long as gender equality and an exchange of basic human rights between men and women are regarded as privilege and luxury”. 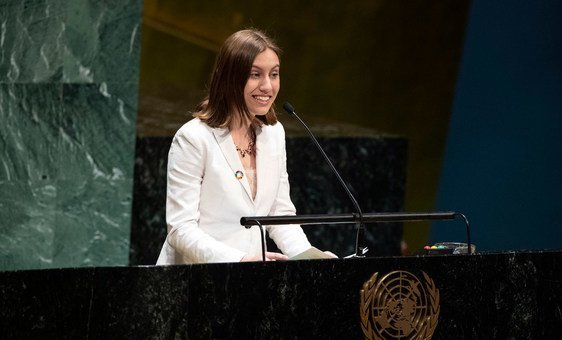 Secretary-General António Guterres bemoaned that 25 years after the Beijing conference, progress on women’s rights has stalled and even reversed.

“Some countries have rolled back laws that protect women from violence; others are reducing civic space; still others are pursuing economic and immigration policies that indirectly discriminate against women”, he said, adding that “bias against gender equality is growing in some countries”.

“I am a proud feminist”, avowed the UN chief.  “Only through the equal participation of women can we benefit from the intelligence, experience and insights of all of humanity”.

He spoke at length about unsung women heroes, such as American scientist Eunice Foote who proved that changes in carbon dioxide could affect the Earth’s temperature and Tu Youyou, who saved millions of lives around by turning to traditional Chinese medicine for a cure for malaria.

Over the next two years, he vowed to do everything in his power “to make sure women are represented in all decision-making at the United Nations, including in peace processes”.

UNOPS
Mounted Patrol Police Officer Yana Khmelyova wanted to work in law-enforcement since she was a child, Ukraine.

General Assembly President Tijjani Muhammad-Bande called on everyone, to defend gender equality as “a necessity in upholding human rights”.

Noting that no country has achieved gender parity, he stated, “we have much work to do”.

As we enter the Decade of Action to implement the Sustainable Development Goals (SDGs), the Assembly president flagged the need to mainstream SDG 5 – Gender Equality – across all of our work.

“This ensures that women and girls have the opportunity to participate equally in all decisions”, he explained. 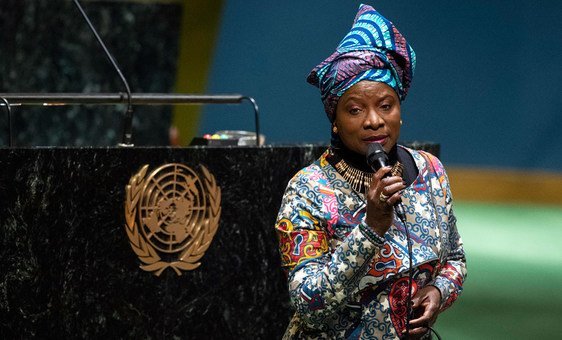 And in commemorating ten years of the UN Women entity, he called for support to ‘Generation Equality’ “to guarantee that equality becomes a lived experience for everyone, regardless of gender”.

“By working together…we can galvanize multilateral action to realize the human rights of all women and girls”, he affirmed.

The day also included what was billed as an Intergenerational Fireside Chat in which the head of UN Women, Ms. Gbowee and Ms. Villaseñor were joined by 18-year old fashion model, Aaron Philip, and feminist author and organizer Charlotte Bunch, to discuss women-related issues.

And it was capped by musical performances from UNICEF Goodwill Ambassador and Grammy Award winner, Angélique Kidjo, and other singers.

Elsewhere, hundreds of events had been mobilized to demand progress on closing the gender gap in countries worldwide. A global comic and cartoon competition, around the theme Beijing+25 and Generation Equality was launched in partnership with Belgium, France, Mexico and the European Commission, calling on the younger generation to envision how they see gender equality. 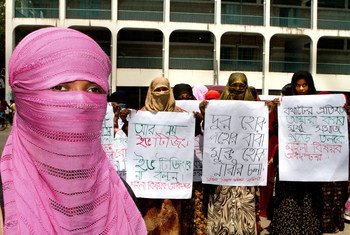 Women's Rights in Review, 25 years after Beijing takes stock of how the landmark gender equality plan, the Beijing Platform for Action, is being implemented and calls for greater parity and justice. 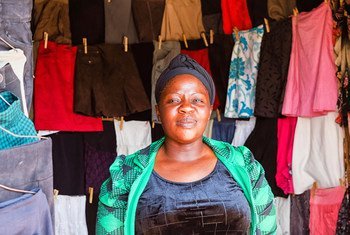 Despite decades of progress in closing the gender equality gap, close to nine out of 10 men and women around the world, hold some sort of bias against women, according to new findings published on Thursday from the UN Development Programmme (UNDP).