WHO
In a two-day operation, the World Health Organization (WHO) has sent seven truckloads, or 55 tons of medicine and medical supplies, from Turkey into Idlib governorate and parts of Aleppo.
28 February 2020
Peace and Security

The UN chief António Guterres, described the current displacement crisis in and around Idlib, and the escalation in fighting between Turkish and Russian-backed Syrian forces, as “one of the most alarming moments” of the nearly-decade long war.

“Without urgent action, the risk of even greater escalation grows by the hour. And as always, civilians are paying the gravest price”, he told reporters at UN Headquarters in New York.

“Even camps and other sites where displaced families have sought shelter have been struck by shelling.”

He said that the most pressing need was an immediate ceasefire “before the situation gets entirely out of control.”

Speaking just hours before the UN Security Council is due to meet in emergency session to discuss the escalation in fighting in Syria,  the UN chief said that “now it’s time to give a chance for diplomacy to work, and it’s essential that fighting stops.”

'Mayhem' on the ground

Briefing the press in Geneva earlier in the day, WHO Spokesperson Christian Lindmeier said that health workers were describing "mayhem in their health facilities."

"As of today, 84 health facilities have been forced to suspend operations since 1 December 2019," -- @WHO

"We now have 950,000 displacements going in absolutely horrifying conditions. People have nothing and they have no place to go," -- @UNOCHA #Idlib #Syria pic.twitter.com/B012LyA32G

Speaking in Geneva, he explained that nearly 170,000 “newly displaced people are sleeping out in the open” in Idlib - the last opposition-held area of Syria that is the target of a Government-led military campaign – with 100,000 children exposed to temperatures close to freezing.

The crisis is the worst that people in northwest Syria have experienced since the beginning of the conflict in 2011, UN humanitarians maintain.

Since 1 December, it is estimated that that nearly a million people have been displaced in the embattled region. Conditions are “horrifying”, said Jens Laerke, Spokesperson for the Office for the Coordination for Humanitarian Affairs (OCHA).

Since 1 December, 11 healthcare facilities have been attacked, causing 10 deaths and 37 injuries, according to WHO.

The UN agency also warned that the displacement crisis has created huge healthcare needs in some medical centres and hospitals but left other facilities deserted, amid a “sharp rise in trauma cases”.

“As of today, 84 health facilities have been forced to suspend operations since 1 December last year, out of those 84, 31 have been able to relocate and provide services where people have sought refuge from bombardments”, Mr. Lindmeier said.

As part of a major and ongoing humanitarian operation, WHO sent 55 tonnes of medicine and medical supplies from Turkey into Idlib governorate and parts of Aleppo on Tuesday and Wednesday.

These are being distributed to WHO partners in more than 150 facilities - approximately half of functioning health facilities in the northwest.

Amid reports that the Turkish authorities had begun allowing Syrian civilians to cross into Turkey after dozens of Turkish soldiers were reportedly killed in an attack linked to Syrian Government forces, OCHA said that cross-border aid deliveries would proceed.

“We have no official…communication from the Turkish Government about any change as of now”, Mr. Laerke said. “So, the cross-border operation does continue, and I could add that in the first two months of this year we have had more than 2,000 trucks crossing that border and that operation continues.”

♦ Receive daily updates directly in your inbox - Subscribe here to a topic.
♦ Download the UN News app for your iOS or Android devices.
syria|Idlib|turkey 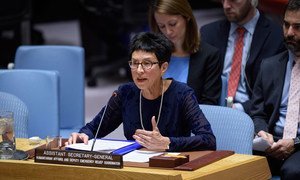 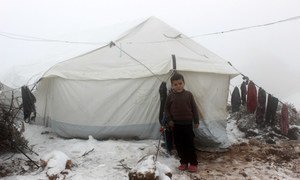