Singapore and Fiji have become the first countries to ratify a UN treaty that promotes mediation as an alternative and effective method for resolving trade disputes, thus marking an important step towards its entry into force.

During a ceremony at UN Headquarters on Tuesday, Singapore Senior Minister of State Edwin Tong Chun Fai and Ambassador Satyendra Prasad of Fiji deposited their instruments of ratification for the United Nations Convention on International Settlement Agreements Resulting from Mediation, which was adopted by the General Assembly in December 2018.

Also known as the Singapore Convention on Mediation, it aims to achieve universal recognition of mediation as a powerful tool to solve disputes and support its wider use as a quick and non-confrontational method for commercial dispute resolution.

The Singapore Convention on Mediation provides countries with something which had not existed before: an effective mechanism to enforce international settlement agreements resulting from mediation.

As the UN Office for Legal Affairs (OLA) explained, promoting the use of mediation in international trade and investment facilitates solving conflicts without going through formal – and sometimes lengthy and costly – legal processes.

Mediation also supports global efforts to realize a better future for all people and the planet through achieving the 17 Sustainable Development Goals (SDGs) by 2030. It particularly reflects the ideals of SDG 16 on promoting peace, justice and strong institutions.

The Singapore Convention on Mediation opened for signature on 7 August 2019 and has been signed by 52 countries.

However, signatories still need to ratify, accept or approve the Convention, which is also open for accession by all countries that are not signatories.

It will enter into force six months after three States deposit their instruments of ratification.

♦ Receive daily updates directly in your inbox - Subscribe here to a topic.
♦ Download the UN News app for your iOS or Android devices.
Legal Counsel|Singapore|fiji 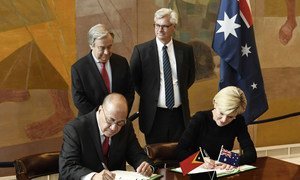 Australia and Timor-Leste on Tuesday signed a bilateral maritime boundaries treaty, which United Nations Secretary-General António Guterres hailed as a ground-breaking event that could inspire other countries to peacefully settle disputes through mediation.