WFP/Marwa Awad
Family members who have fled conflict sit inside their tent at the Pissila camp for displaced people in Burkina Faso.

Deadly attacks on villages in Burkina Faso have forced 150,000 people to flee in just the last three weeks, the UN refugee agency (UNHCR) said on Friday, warning of a displacement emergency in the wider Sahel region.

Amid a devastating surge in terrorist attacks against civilian and military targets which the UN says have risen five-fold in Burkina Faso, Mali and Niger since 2016, UNHCR spokesperson Andrej Mahecic said that survivors needed safety, shelter, food and water “everywhere”.

Help is particularly needed in northern Burkina Faso, where displaced families are staying with host communities who have little in the way of resources themselves.

🚨 This is what the dramatic rise in forced displacement in Burkina Faso looks like. It is unacceptable. pic.twitter.com/D6qkXdDfS4

Some 4,000 people a day flee violence

The new arrivals are “occupying whatever space is available”, the UNHCR official explained, stressing that more than 4,000 people a day have fled attacks in Burkina Faso, since 1 January.

Those forced to flee “report attacks on their villages by militant groups, killing, raping, and pillaging,” the UNHCR official said. “Terrified of these attacks, residents have left everything behind to find safety.”

A similar pattern of violence has driven people from their homes in Mali and Niger, adding to the longstanding insecurity crisis further afield in the Lake Chad region, where the UN humanitarian coordination office (OCHA) estimates that 2.3 million people are displaced.

Following a recent string of attacks in Niger’s Tillaberi and Tahoua regions, UNHCR reported that 4,400 people have fled into neighbouring Mali, while the same wave of violence has displaced around 11,000 people inside Niger.

“They have found refuge in nearby towns of Banibangu and Ouallam, where assistance is being provided,” Mr. Mahecic said, noting that the regions of Tillaberi and Tahoua host 58,000 refugees from Mali and nearly 81,000 displaced people.

In central Mali, the UNHCR official noted that the latest attacks on the village of Ogossagou on 14 February had claimed 30 lives.

‘Too afraid to move’

“Safety is needed for these people,” he said. “In some of these situations, people are so afraid of the insecurity and violence around them that even though they are under attack or fearing of an attack, they do not dare to move.”

The Sahel region encompasses an area south of the Sahara Desert spanning 10 countries from Senegal in the west to Eritrea, in the east.

Violence there intensified after the 2011 revolution in Libya, and an uprising in Mali a year later. As a result, terrorist groups, organized criminal groups and others took advantage of weak governance and ethnic tensions to move across borders and terrorize local populations.

Highlighting severe challenges in accessing the needs of victims of violence throughout the Sahel region, Mr. Mahecic explained that safety, shelter food and water were a priority.

Clothing and other basic items, including dignity kits for women and girls, were also urgently needed, he said, along with counselling for survivors of atrocities.

“What we know right now, is that the violence and the frequency of these attacks have increased, the intensity has increased, and we know that this is the key reason behind this massive displacement,” he said.

WFP/Marwa Awad
Zore Yusef shares a meal with one of his children. Armed conflict forced his family to flee the northern region of Burkina Faso.

UNHCR and its partners have stepped up their response, including by strengthening health and education facilities for communities, Mr. Mahecic added, before appealing for safe access for humanitarians to deliver assistance.

According to the UN Special Representative and Head of the UN Office for West Africa and the Sahel (UNOWAS), violence in the Sahel claimed more than 4,000 lives in 2019, compared to 770 in 2013.

In a briefing to the Security Council last month, Mohamed Ibn Chambas described “relentless attacks” that had shaken public confidence in the authorities.

“Most significantly,” he said, “the geographic focus of terrorist attacks has shifted eastwards from Mali to Burkina Faso and is increasingly threatening West African coastal States.”

Mr. Chambas also explained how the attacks were often perpetrated by extremists looking to engage in illicit activities that included capturing weapons and illegal artisanal mining.

“Extremists provide safety and protection to populations, as well as social services in exchanged for loyalty”, he said. 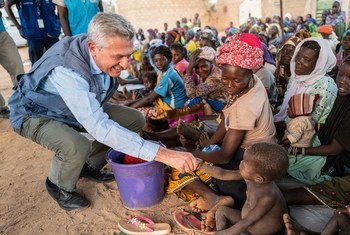