The impressive opening ceremony curated by AbuDhabi is a fitting opening for this very important forum &amp; a demonstration of the type of cooperation this world needs. There were many people involved in putting this together today, thank you to all the people who worked on this! pic.twitter.com/XsHnsreCty

In his video message, the UN Secretary-General thanked Abu Dhabi for hosting this first ever World Urban Forum in the Arab Region.

He noted that urbanization is one of the megatrends of our times and steering it well, will help address global challenges such as climate change.

“As we embark on a Decade of Action to deliver the Sustainable Development Goals, the world’s cities, towns and communities will be at the heart of this work”, said the UN chief.

“The United Nations counts on local and national leaders, businesses, civil society and other partners to help provide solutions to global threats, including the climate emergency” Mr. Guterres added, urging participants to make sustainable urbanization a reality and ensure that no one and no place is left behind.

Ms. Sharif said the Forum had truly come of age as the world’s premier gathering of thinkers and doers for sustainable urbanization, coinciding this year with the UN’s 75th anniversary.

The President of Afghanistan, Ashraf Ghani, the Prime Minister of the Republic of Fiji, Frank Bainimarama, and the Chairman of the Department of Municipalities and Transport representing the Local Organising Committee of WUF10, Falah Al Ahbabi, were among the dignitaries at Sunday’s ceremony.

Thanking the President of Afghanistan and the Prime Minister of the Republic of Fiji for their continued support of UN-Habitat, Ms. Sharif said it was their sense of urgency, their ability to translate policy into practice and to regard urbanization in holistic terms that would ensure it could be transformed into opportunities for sustainable development.

“Urgent, systematic and global action is required”, said President Ghani. “We have the tools and repertoire of techniques to solve the problem”, he added, noting that the world needed a State-level change of culture, as well as a fresh approach to the culture of global organizations.

Mr. Bainimarama said the Forum offered the opportunity to discuss the role of cities in averting crises by making urban living synonymous with sustainability.

He said living standards in cities had grown remarkably, but that progress has come at the cost of a warming world.

“The old model of development is untenable; if we continue to urbanise on carbon-intensive industries, the world’s cities will crumble into hotbeds of inequality and extreme vulnerability”, he warned.

H.E. Falah Mohammad Al Ahbabi thanked UN-Habitat for its support, guidance and vision in making the Forum in Abu Dhabi a reality.

“It is a privilege to see the world’s greatest minds in sustainability come together from more than 160 countries to challenge the conventional ways, to tackle crucial issues and discover new insights on urbanization”, he said. “With more than 18,000 registered participants and 580 speakers and 133 exhibitors, we have strengthened our capacity and remain united in our vision to create a better world for the next generation.”

Speakers supported the UN-Habitat chief’s call for the Forum to come up with concrete action.

“What I hope to see...is a set of declared actions. Commitments that we will make on a voluntary basis as individuals, communities, cities and countries; and even at local, regional and global levels that help mark this Decade of Action to accomplish the SDGs by 2030,” she said. 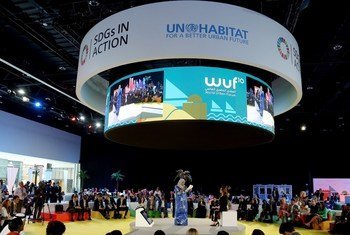