UN-Habitat/Waseem Ali
Ms. Maimunah Mohd Sharif, Executive Director of UN-Habitat, speaks at the opening of assemblies on the first day of the 10th Session of the World Urban Forum in Abu Dhabi. 8 February 2020, United Arab Emirates.

The Executive Director of the UN’s agency for urban affairs, UN-Habitat, Ms. Maimunah Mohd Sharif, urged participants in the five assemblies to focus on concrete outcomes.

Inspiring first day at the 10th Session of the World Urban Forum #WUF10 today listening to the voices of so many people from all over the world who are passionate about making our towns and communities better places to live for everyone. Read more: https://t.co/V63SW3Ube8#SDG11 pic.twitter.com/1p35Zh3z9t

“I know that we share a common vision of sustainable and safer cities. We will go further today. We know that urbanization is unstoppable”, she said at the first event of the six-day meeting being held for the first time in the Arab region, in the capital of the United Arab Emirates, Abu Dhabi.

'There is no time left'

The Youth Assembly was represented at the Joint Opening by Leah Namugerwa, a 15-year old climate activist from Uganda and founder of the youth climate action group Fridays for Future, who told participants they were good at planning but fell short on implementation.

“I am here to promote action to ensure that children and youth are truly represented in your decisions making processes. We must take action. There is no time left...Please take serious climate action now,” she pleaded.

The Chair of the Global Board of the Huairou Commission, Ms. Violet Shivutse said women were coming to cities for various reasons and faced several challenges including housing, inadequate provision of childcare facilities, and lack of security.

“We may be poor, homeless, and landless, but we are not hopeless,” she concluded.

The Chief Executive of the bank, HSBC Amanah Malaysia, Arsalaan Ahmed, pointed out that while the public sector is an enabler, the private sector can and should provide the international financial capital required to ensure sustainability.

Following the Opening Session, delegates rushed to attend the various Assemblies taking place concurrently. The importance of working with all levels of government was emphasized at the World Assembly on Local and Regional Governments.

The President of the South African Local Government Association Thembisile Nkadimeng, Mayor of Polokwane, referred to the WUF10 theme, Cities of Opportunities Connecting Culture and Creativity, saying that “culture plays an important part in influencing creativity around the world and contributes to inclusive and sustainable development...Local and regional authorities are well placed. Johannesburg has used culture as a key for reversing urban decay.”

‘Youth have a huge role’

The Youth Assembly heard from Ms. Joyce Msuya, Deputy Executive Director of the United Nations Environment Programme (UNEP) who told them: "Youth have a huge role in driving political will. It is time for us to trust the youth. They are ready to listen, link, learn and lead.”

Young Kenyan community leader Isaac Muasa told the Youth Assembly that the biggest challenge was unemployment and lack of opportunities.

Juan Ramón Lazcano de la Concha, Vice Mayor of the City of Santa Cruz de Tenerife, in the Canary Islands, Spain, said flexibility would be needed going forward: “We need to generate the ability to resist, change, reform and adapt to everything ahead. There will be new jobs relationships and ways of inhabiting the planet and these will be future challenges,” he stated.

In the Business Assembly, UN-Habitat’s Deputy Executive Director, Victor Kisob, said creating well-functioning, sustainable cities, required massive funding and this should be turned into an opportunity for investors.

“As the global leader on sustainable urbanization, UN-Habitat is capitalising on its unique position to rally a broad spectrum of partners to innovate cities of the future,” he said.

In the Women’s Assembly, Hoda Alkhzaimi President of Emirates Digital Association for Women spoke about the main challenges being perceptions and the importance of “pushing boundaries, breaking boxes and rebuilding norms.”

Her words were echoed by Roheyatou Lowe, Mayor of Banjul, Gambia, who said her priority was to change the narrative to empower women and break down barriers to make hers a more gender-responsive and “smart” city. 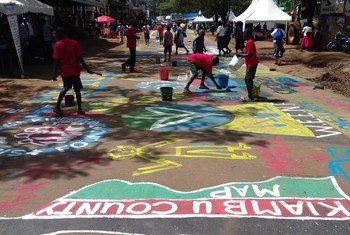 In cities and communities across the world, citizens of all ages and backgrounds are getting the chance to literally play an important role in redesigning their public spaces, thanks to an innovative collaboration between the UN, and the company behind the popular computer game Minecraft. 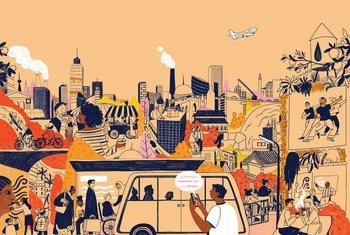 Over half of the world’s population now live in cities, with numbers expected to double by 2050, but while urbanization poses serious challenges, cities can also be powerhouses for sustainable development; something the UN is spotlighting on World Cities Day, marked 31 October.