© UNICEF/Marko Kokic
A 10-year-old girl stands by metal debris which was once part of a girls' school that was destroyed during a bomb blast in 2015, in Bodyalai village, Afghanistan.
30 December 2019
Peace and Security

Conflicts around the world are lasting longer and claiming more young lives, UNICEF Executive Director Henrietta Fore said on Monday, as the agency reported that over this ‘deadly decade’, there has been a three-fold rise in verified attacks on children since 2010 – an average of 45 violations a day.

“Attacks on children continue unabated as warring parties flout one of the most basic rules of war: the protection of children,” said Ms. Fore, noting that the number of countries experiencing conflict is the highest it has been since the adoption of the Convention on the Rights of the Child in 1989.

Attacks on children continue unabated as warring parties flout one of the most basic rules of war: the protection of children. #ChildrenUnderAttackhttps://t.co/vyl1zKqhZ1

With dozens of violent armed conflicts killing and maiming children and forcing them from their homes, the UNICEF chief said that for every act of violence against children that creates headlines and cries of outrage, “there are many more that go unreported.”

In 2018, the UN verified more than 24,000 grave violations against children, including killing, maiming, sexual violence, abductions, denial of humanitarian access, child recruitment and attacks on schools and hospitals. While monitoring and reporting efforts have been strengthened, this number is more than two-and-a-half times higher than that recorded in 2010.

Attacks and violence against children have not let up throughout 2019. During the first half of the year, the UN has verified over 10,000 such violations against children – although actual numbers are likely to be much higher – in conflict zones from northern Syria to eastern Democratica Republic of the Congo (DRC), and eastern Ukraine.

As 2019 draws to a close with “no letup in the attacks and violence against children in sight,” UNICEF is calling on all warring parties to abide by their obligations under international law and to immediately end violations against children and the targeting of civilian infrastructure, including schools, hospitals and water infrastructure.

The UN Children’s Fund is also calling on States with influence over parties to conflict to use that influence to protect children.

♦ Receive daily updates directly in your inbox - Subscribe here to a topic.
♦ Download the UN News app for your iOS or Android devices.
Children in Armed Conflict 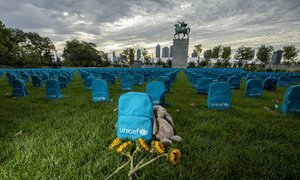