Lesotho: Tens of thousands ‘one step away from famine’ as drought impacts harvests and UN launches flash appeal

Lesotho: Tens of thousands ‘one step away from famine’ as drought impacts harvests and UN launches flash appeal

Devastating drought in the southern African nation of Lesotho has left more than half a million people facing severe food shortages and tens of thousands “one step away from famine”, UN humanitarians said on Friday, in an appeal for funds.

The $34 million flash appeal will support more than 260,000 people “with lifesaving interventions” until April next year, Jens Laerke from the Office for the Coordination of Humanitarian Affairs (OCHA), told journalists in Geneva.

A total of half a million people – more than 1/4 of the population of #Lesotho – are facing severe food insecurity because of severe drought which has gripped the country. @UNOCHA today launched a USD 34 million flash appeal to support Lesotho. pic.twitter.com/3N179GC9Ss

“Most of the food insecure people are in rural areas and we estimate that at the peak of the lean season, which runs from January to March, some 71,000 people will face emergency conditions in rural districts. That is IPC phase 4 – one step away from famine,” the spokesperson added.

Increasingly, women and girls “have reportedly left their rural homes to urban areas or South Africa in search of work, mostly as domestic workers trading sex for money or food” it warned.

One worry linked to this migration is that Lesotho has the second highest HIV prevalence rate in the world, at more than one in four people.

Citing the latest Integrated Food Security Phase Classification food security assessments, often referred to by the acronym IPC, the spokesperson explained that the 2018/2019 planting season had been badly affected by late rains and scorching temperatures.

The most vulnerable are in Leribe and Maseru districts.

More than 25% of the country severely food insecure

Today, “a total of half a million people – that’s more than a quarter of the population of Lesotho…are facing severe food insecurity because of severe drought which has gripped the country at the same time as people are approaching the peak of the lean season”, Mr. Laerke said.

Highlighting the catastrophic impact of the extreme weather on harvests, Mr. Laerke said that overall cereal production had decreased by more than 60 per cent compared to 2018.

Individual crops have suffered even greater losses, such as maize and sorghum, which respectively saw reductions of 78 and 93 per cent.

“The Government of Lesotho on 30 October declared a national disaster and issued a drought response and resilience plan,” he said. “Our flash appeal will support that plan.”

The UN appeal aims to conduct awareness-raising sessions and distribute life-saving information materials about risks of irregular migration, gender-based violence, violence against children, child marriage, trafficking in persons and how to report abuse. 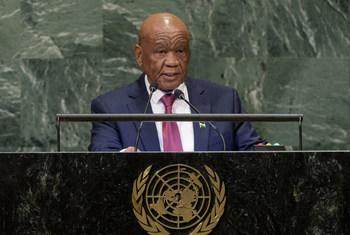 Addressing the United Nations General Assembly, the Prime Minister of Lesotho highlighted the opportunities offered by migration and called on the international community to adhere to the Global Compact for Safe, Orderly and Regular Migration. 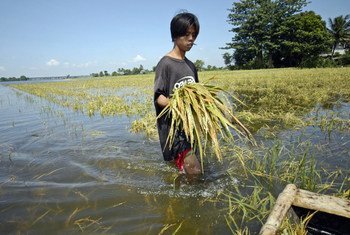