MONUSCO
Peacekeepers from the UN Organization Stabilization Mission in the Democratic Republic of the Congo (MONUSCO) on patrol in the Irumu Territory, Ituri, to deter ADF activities.
26 November 2019
Peace and Security

Angry residents torched the town hall and the UN compound in the city of Beni, in North Kivu, protesting what they saw as the failure by Government forces and peacekeepers to prevent a deadly weekend attack by the Allied Democratic Forces (ADF) rebel group, according to media reports.

Leila Zerrougui, head of the UN mission, known by the French acronym, MONUSCO, spoke to journalists in New York after briefing the UN Security Council behind closed doors, on what she described as the “very disturbing” situation.

“We are facing challenges which are very hard for a mission to deal with because you have demonstrations from people frustrated with attacks from armed groups; from ADF but other armed groups in the area”, she said, speaking from the capital, Kinshasa.

Overall, more than 100 groups are operating in the eastern DRC.

Ms. Zerrougui reported that so far this month, there have been around 14 attacks, with some 80 people killed in a region that currently is facing the worst Ebola outbreak in the nation’s history.

More than 2,000 people have died from the disease since the outbreak was declared last August.

The World Health Organization (WHO) said although the violence in Beni was not directed against its teams, 49 out of 120 staff will be relocated to the North Kivu capital, Goma.

MONUSCO took to Twitter on Monday to announce that it will strengthen cooperation with its partners and work closely with the Congolese authorities to find solutions for the people of Beni.

“We are dealing in a very difficult context,” Ms. Zerrougui told journalists. “We have spoilers. We also have people that manipulate the suffering of the people and use it either against the Government or against MONUSCO.

“We are the scapegoat. We know that. We assume and accept because we have no other option than to do our work and to try to mitigate the attacks against the civilian population.” 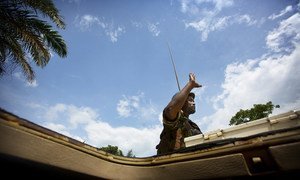 The head of the UN peacekeeping mission in the Democratic Republic of the Congo (DRC) has met with national authorities in the wake of an attack against its headquarters in Beni on Monday, which left the building badly damaged.